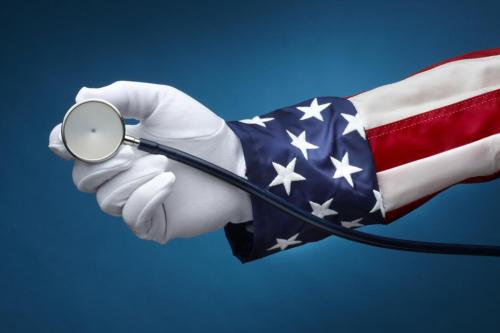 What Is Socialized Medicine? Everything You Need To Know

While universal healthcare and single-payer systems are making headlines, and even more drastic overhaul of the US healthcare system is making strides. Here’s what you need to know about socialized medicine.

Socialized medicine has been something of a buzzword in the American political sphere as of late. It is often a divisive topic, with many people taking a strong stance for or against it. However, most people, politicians included, are confused about what the term actually means. So, what exactly is socialized medicine, and more importantly, how does it work?

What is Socialized Medicine?

Socialized medicine is a system of health care delivery that is publicly funded, meaning medical expenses are covered or partially covered by taxes. It allows for greater access to medical care since it removes the need for individuals to purchase private health insurance or bear all of the costs associated with medical services out-of-pocket. In socialized medicine systems, all citizens regardless of their income level are provided with access to quality and affordable healthcare. Socialized medicine also helps reduce inequalities in access to care, which can lead to improved health outcomes for individuals and societies at large.

Socialized medicine is funded by taxes, with taxpayers in countries with this system often taxed at a higher rate than those in countries without it. In return, they get free, government-provided health services and free, or very low-cost, prescription drugs. The only procedures patients must pay for in this system are elective procedures, such as cosmetic surgery.

Examples of socialized medicine can be found in most developed nations, but our focus will be fixed on the British National Health Service or NHS, which provides the majority of healthcare in Britain. Many healthcare facilities in Britain are owned and operated by the British government. Under the NHS, all necessary appointments and treatments are provided at no cost to the patient, and many prescription drugs are covered at no or low cost.

There’s actually an example of socialized medicine right here in the US, which you are probably familiar with already. The healthcare services provided by the Department of Veteran Affairs, commonly referred to as the VA, are profound examples of what a government-run healthcare program would look like. The VA provides US veterans with free or low-cost medical services through government-owned facilities and pharmacies.

Some Of The Most Common Misconceptions

Socialized medicine is often misunderstood and misrepresented, leading to some common misconceptions. For example, many people believe that socialized medicine means the government pays for all medical expenses. However, that is not the case - patients are still responsible for paying their own copays and deductibles. Additionally, many mistakenly think that it leads to rationing or a decrease in the quality of care. On the contrary, research shows that socialized systems can actually lead to an increase in health outcomes due to access to preventative care services and better continuity of care.

Other common misconceptions include confusing it with universal healthcare, single-payer systems, and Obamacare. Although there are similarities between them, there are key differences that set them apart, and the terms should not be used interchangeably.

How Does the Socialized Medicine System Differ From Universal Healthcare?

Universal healthcare guarantees access to basic healthcare for all citizens of a particular nation. This is often achieved through a mix of public and private coverage, rather than only government coverage. Usually, the medical facilities and providers in a universal healthcare system are privately owned. This completely differs from a socialized medical system where the government pays for all services, owns the facilities, and employs providers.

How Does the Socialized Medicine System Differ From Single-Payer Healthcare?

How Does the Socialized Medicine System Differ from Obamacare?

No, the Affordable Care Act (ACA), also known as Obamacare, is not socialized medicine. Instead, it is a system of health insurance coverage that seeks to make healthcare more accessible and affordable for people who do not have employer-sponsored health insurance. The ACA subsidizes the purchase of private health insurance through subsidies and tax credits. It also expands eligibility requirements for Medicaid, which is a public health program in the United States. While Obamacare has increased access to healthcare, it falls far short of providing full socialized medicine coverage.

The Pros And Cons Of Socialized Medicine

There are many benefits to socialized medicine. It makes healthcare more accessible, can lead to better public health, and prevents people from going bankrupt due to medical expenses. However, there are also drawbacks such as long wait times for treatment, higher tax burdens, and the elimination of competition in healthcare.

Whether or not socialized medicine works is still largely up for debate and depends on your perspective. If you look at Britain’s NHS, it has been rated the safest, most affordable healthcare system in a survey of 11 wealthy countries performed by the Commonwealth Fund. However, it ranked 10th out of 11 countries in the healthcare outcomes category of that same study, which indicates some problems with the system. Like all healthcare systems, there are positive and negative aspects and one must decide whether or not the pros outweigh the cons.

Many countries around the world have socialized medicine systems in place, providing citizens with access to free or low-cost healthcare services. In Canada and France, citizens are provided universal health coverage through taxes subsidized by their government. Other nations like Spain, Sweden, and Norway all feature strong public-funded healthcare programs. The United Kingdom is well known for its National Health Service which covers most medical treatments for residents. Germany also has a system of insurance funds covering basic care through state-run programs rather than private insurance companies. These socialized medicine systems reduce costs with the government taking on much of the burden associated with providing healthcare services to its citizens.

America does not have a full socialized medicine system, but there are certain components of the healthcare infrastructure that are government funded. Medicare and Medicaid are two examples of public health insurance programs that offer free or low-cost health care to certain groups of people, such as those with disabilities, seniors, and low income families. Additionally, the Affordable Care Act (ACA) makes it easier for people to purchase private health insurance plans with subsidized rates for those who cannot afford them. While America does not have a completely socialized medicine system like other countries, there are many government measures in place to ensure people have access to quality healthcare.

Socialized medicine would mean having access to free or low-cost healthcare services for all citizens, regardless of their income level. It would reduce financial barriers for individuals who cannot afford expensive health insurance plans. Additionally, it could lower medical costs in general, as the government would be covering the expenses associated with providing medical care. Socialized medicine could also provide more equitable access to quality care by providing everyone with access to the same resources and treatments. Moreover, with one healthcare system in place, opportunities for research and development could become more frequent and widely available. If you want to learn more about affordable health plans, enter your zip code to get the quotes instantly on First Quote Health!