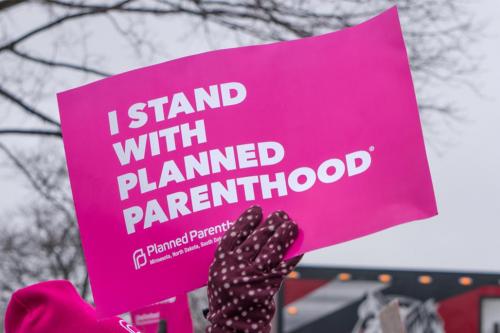 Planned Parenthood Funding Scores A Win Against Trump And The GOP

Thanks to US District Judge Thomas Rice, Planned Parenthood, and other sex education organizations will have funding through 2020 after President Trump and the GOP attempted to cut federal grants to the Teen Pregnancy Prevention Program in 2017.

Planned Parenthood scored a major win this week against President Trump and the GOP when a Federal Judge ruled against ending grants two years earlier than previously planned. US District Judge Thomas Rice is the new champion for women’s rights everywhere when he ruled that defunding Planned Parenthood would cause public harm. Judge Rice ruled:

“The Court determines that the public interest weighs in favor of Plaintiffs, as it would prevent harm to the community … and prevent loss of data regarding the effectiveness of teen pregnancy prevention”

What Was At Stake For Planned Parenthood & Teen Pregnancy?

In 2010, President Obama created a successful Teen Pregnancy Prevention Program. The program gave around $90 million in grants to 81 organizations that help educate teens on the importance of safe sex. The program was renewed in 2015 for an additional 5 years after evidence proved its success, meaning the grants would be up for renewal again in 2020. However, the GOP, headed by President Donald Trump decided to cut funding by nearly $200 million in 2017, which would effectively defund the Teen Pregnancy Prevention Program in 2018, two years early.

So what was at stake? The possibility that essential programs, like Planned Parenthood, would lose out on funding, eliminating healthcare access for millions of women across the US. Thankfully, members of Congress and Planned Parenthood decided to take matters into their own hands, and filed a lawsuit against the Trump administration.

Leading the fight were Representatives Gwen Moore and Marc Veasey, the Executive Vice President of Planned Parenthood Federation of America Dawn Laguenes, along with countless volunteer advocates for Planned Parenthood. The fight resulted in:

For now, funding for Planned Parenthood, and other organizations that focus on sex education are safe. However, the funding is set for renewal again in 2020, so the safety of the Teen Pregnancy Prevention Program may be in jeopardy depending on who takes office. Meaning the fight for sex education and women’s healthcare is still very much alive.

If you are looking to get involved, voicing your opinion to Congress and attending local and national events that advocate for women’s rights and sex education are great places to start. Ultimately, making a change starts at your local election level, and ensuring that those elected to office share those same values.