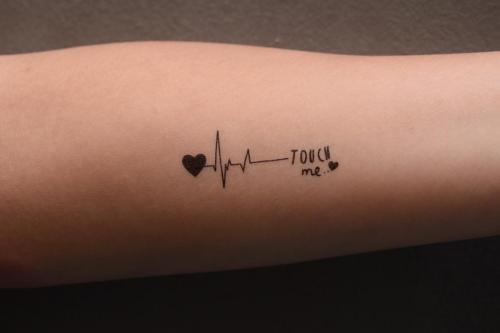 Spotting Mental Health Tattoos And Symbols - Learn What They Mean

The semicolon and green ribbon have become the main symbols in today's fight to break down the walls and stigmas surrounding mental health disorders and illnesses. If you see anyone rocking these tattoos or symbols, here's what it means.

Mental illness comes in many forms, including depression, anxiety, bipolar disorder, eating disorders, and substance abuse. Unfortunately, many people with mental illness face a negative social stigma, despite the illness being out of their control.

What Is the Mental Health Ribbon?

The lime green mental health ribbon is designed to improve mental health awareness in the United States. It’s the most recognizable mental health symbol, although it can also represent awareness of other issues. It’s also part of the StigmaFree campaign from the National Alliance on Mental Illness (NAMI) to end the stigma of mental illness and create hope for the millions who struggle with mental health issues.

Mental Health Tattoos and the Semicolon

Project Semicolon is one of the biggest movements raising awareness for mental health across the world. The movement of using the semicolon, especially in the form of mental health tattoos, serves as a symbol of hope for people who struggle with mental illness. Within a short period of time, many have come to recognize this mental health symbol and view it as the perfect expression of living with a mental disorder.

Project Semicolon was founded by Amy Bleuel in 2013, ten years after her father committed suicide. According to Bleuel, the semicolon represents continuance. Bleuel added, “Authors usually use the semicolon when they choose not to end the sentence. You are the author and the sentence is your life.”

While Bleuel said the semicolon campaign was not intended to lead to mental health tattoos, that’s what happened after her blog post went viral and she decided to get a semicolon tattoo herself. Within less than a year, it became a powerful mental health symbol.

Project Semicolon may be best known for the thousands of mental health tattoos it’s inspired, but it’s also a registered charity that raises money to fight the stigma of mental illness and give hope to those in need. The semicolon mental health tattoos have become so popular, though that one tattoo shop in Calgary called Dusk Till Dawn donates a portion of the proceeds from every semicolon tattoo to the Canadian Mental Health Association.

Mental illness like depression is a leading cause of disability around the world. Struggling with a mental health issue can affect every area of your life from work and relationships to sleep, nutrition, stress, exercise, and digestion. About 1 out of 25 adults in the U.S. experience serious mental illness every year that substantially affects major life activities, but 1 out of every 5 teens and adults experience some type of mental health disorder at some point in their life.

Depression and anxiety disorders are the most common mental health issues in the United States. Nearly 18% of the population has a type of anxiety disorder and 7% of adults have at least a single major depressive episode per year. Mental illness affects teens and adults from all walks of life but many do not even seek treatment. This is largely due to the social stigma of having a mental illness, which is viewed as being weak or of poor character.

While mental illness can’t be cured, it can often be managed effectively with psychotherapy, medication, and other solutions that improve quality of life, confidence, and health. There are even a number of apps that can help you take better care of yourself and manage mental health issues like depression and anxiety.