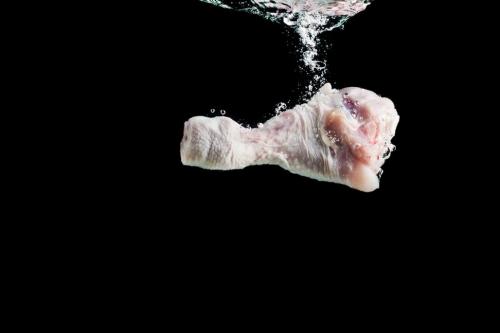 Washing Chicken Debate: Should You Or Shouldn’t You? (CDC Warning)

A recent tweet from the Center for Disease Control (CDC) advising against washing raw chicken has created quite the fall out among internet users. Where do you fall on the latest viral debate?

Here we go again. The internet was set ablaze earlier this month when the CDC tweeted that washing raw chicken does more harm than good. Of course, the simple health tip from the Center for Disease Control caused a divide among Americans, and sides were quickly taken. Here’s everything we know so far.

The CDC Warns Against Washing Chicken

The CDC posted a statement saying that people should not wash raw chicken before cooking it. They said that raw chicken is often contaminated with Campylobacter and this, along with Salmonella and Clostridium, can spread around your kitchen if you wash it. Anything that your chicken comes into contact with will be exposed to these bacteria that can leave you and your family with food poisoning.

While many people do wash the areas that were exposed to the raw chicken, the bacteria can spread to a two or three-foot radius. Many people are not aware of this and the CDC says that washing raw chicken can leave you and your family at risk of getting food poisoning. They advise against cleaning the chicken.

According to the the U.S., Foodborne Disease Outbreak Surveillance System poultry was responsible for nearly 25 percent of all food poisoning instances in the United States.

Health Concerns You’re Exposing Yourself To

Food poisoning is a serious illness that can cause people to develop a high fever, diarrhea, bloody stool, vomiting, and dehydration. Food poisoning can last for several days and can result in needing to see a doctor. The bacteria from cleaning chicken can live in your kitchen for a while so it is best to avoid washing it to prevent getting sick.

While the CDC warning recommends not washing chicken many people still do it. The CDC has said for years not to wash raw chicken, but they recently posted this statement on social media. The statement about not washing raw chicken has sparked a viral debate.

People from all over the world are sharing their comments about whether or not they wash and clean chicken before cooking it. Social media sites, like Twitter, have given people a platform to share their opinions about this topic. Some people are outraged that the CDC would say this, while other people completely agree with the CDC.

Why People Wash Their Raw Chicken

What You Should Do Instead

Rather than washing your raw chicken, there are some things that you can do to make sure your chicken is safe to eat. In the grocery store, you should be sure to place your chicken in a plastic bag to help contain germs inside of the bag and to ensure the bacteria does not spread to other food. When you get home and want to cook your chicken you should avoid washing it and you should use separate cutting boards and utensils for your raw chicken.

To ensure that all the food you are eating is safe you should keep all food, especially uncooked foods like fruit and vegetables, away from the raw chicken. When cooking your chicken you should use a meat thermometer to make sure the chicken reaches 165 degrees. These preventative steps can help keep you and your family safe from bacteria causing food poisoning.

Other Foods You Shouldn’t Wash

Like chicken, there are other foods that people should not wash in order to prevent food poisoning and the spread of bacteria. Some of these foods include eggs, meat, and pasta. Washing eggs and meat can spread bacteria around your kitchen making you and your family sick.

To prevent campylobacter bacteria poisoning, which is the bacteria found on raw chicken, you should take all necessary precautions. The CDC warning recommends wrapping chicken from the store in a plastic bag to prevent bacteria from spreading to other foods in your shopping cart. They also recommend that you do not wash your chicken and that you keep all utensils and cutting boards away from other foods.

If you are preparing your chicken before cooking it you should thoroughly disinfect all areas that your chicken came in contact with. You should also clean everything within a two to a three-foot radius of the chicken to ensure that there are no campylobacter bacteria still in your kitchen.