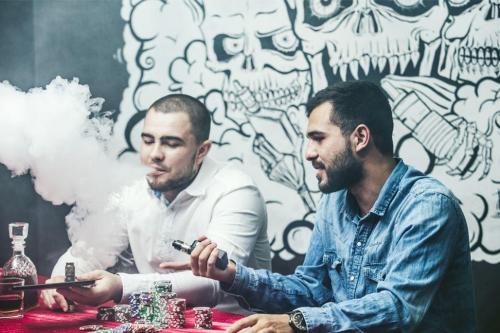 Health Risks of Vaping - Just How Harmful Are E-Cigarettes?

Vaping and E-cigarettes are more popular than ever with nearly 10 million vapers in the US alone. While vaping may be a healthier alternative to cigarettes, it does pose some health risks users should be aware of.

It's no secret that all across the country, use of an e-cigarette and vaping health risks are on the rise. Many people, especially teenagers, are putting down the cigarettes and picking up the vapes. In fact, it's been estimated that nearly 10 million people vape in the US alone, and with vape shops popping up every day, that number is expected to grow.

Is Vaping A Healthier Alternative To Cigarettes?

Yes, vaping is significantly safer than smoking cigarettes a new study finds. However, this is only the case for current tobacco users who are looking for a healthier alternative. So while it's safer for cigarette users to switch to e-cigarettes, the health risks associated with vaping can be harmful to your health. If you are not a current tobacco user, it's recommended you don't pick up an e-cigarette in the first place.

What Does A Vape Contain?

A recent study has found that the chemicals used in vapes can severely damage your lungs. For the longest time, vaping companies tried to keep this information hush-hush by toting that their products are far safer than tobacco products. In several e-cigarettes, scientists found acetyl propionyl and acetoin in many of the flavors that teens and adults know and love. These chemicals have been known to cause lung and brain damage during studies done on rats. Diacetyl is another flavoring found in e-cigs. It's an artificial flavoring that's been known to cause "popcorn lung." Popcorn lung happens when the lungs' smallest airways are destroyed.

Researchers at the University of Technology in Sydney, Australia conducted the first ever paper that focuses on the use of e-cigarettes during pregnancy, and how it can affect the child's lungs. The lead researchers were Hui Chen and Brian Oliver, who claimed were motivated by the vaping's claim that it is 'safer than cigarettes.' What Hui and Brian found was alarming.

According to their research, and contrary to popular belief, even when nicotine was not present, there were health risks many vapers were not aware of. Their studies found that vaping without nicotine produced similar effects to vaping with nicotine, and in some cases, the effects were worse. The duo also discovered the effects of vaping with or without nicotine led to trouble conceiving children, and there was a higher risk for the mother and child to suffer from lung inflammation when they were able to conceive. More research is being done on the matter.

Vaping And Your Ability To Fight Infections

Vaping can actually be harmful to your genes. Researchers examined a group of otherwise healthy people that vaped. This group showed signs of diminished activity in the cells of genes that are known to fight off infections and keep your immune system healthy. This shows that the liquid inside of an e-cigarette suppresses the immune response of a person. This has both immediate short and long-term consequences especially when you get sick.

E-Cigs Can Unexpectedly Blow Up

When it comes to vaping health risks, there's one immediate one that everyone needs to be aware of. E-cigs typically use lithium-ion batteries and with those, there's always a potential that an explosion can occur. There have been several recent incidents in the news in which people suffered severe injuries after their e-cigarettes exploded in their face. Several of these victims suffered third-degree burns and needed skin grafts which will leave a significant scar for the foreseeable future.

Often times, those with an e-cig don't even foresee this happening. They leave it in their pocket, or near them and the next thing they know, there are flames. While these cases may not be commonplace, it is something to keep in mind when choosing or using a vape. Make sure to do your research.

When it comes to e-cigarettes, you control how much nicotine you want on your device. Different juices have different amounts and the higher you purchase, the more dangerous it becomes. The nicotine in these devices has effects on the body, just the same as if you were smoking a regular cigarette. Nicotine in an e-cigarette can worsen heart disease, especially in people who already have a heart condition. Nicotine can also have an effect on blood vessels which can increase your risk of a heart attack. Liquid nicotine is also dangerous because it can fall into the wrong hands. Infants and young children can find it, think it's candy or juice, and ingest it. This can lead to severe side effects and even death. Nicotine in an e-cigarette can also have effects on reproductive health and those who are already pregnant.

While vaping is a healthier alternative to smoking cigarettes, unfortunately, studies have not found it helps you quit smoking altogether. In fact, there is evidence that suggests using e-cigarettes as a tool to quit tobacco use can even lower your chances of quitting. If you are using e-cigs as a healthier alternative to smoking traditional cigarettes, then you are taking a step in the right direction. However, if you are looking to quit, you may want to go through proven programs that have helped millions of people kick the habit.