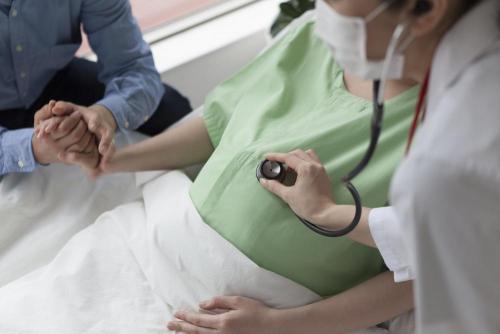 US Named Most Dangerous Of Developed Nations To Give Birth

A shocking new study reveals the US is the most dangerous of the developed nations for women when it comes to giving birth. Between injuries and death, it’s evident more work needs to be done.

You may already be aware that the United States has one of the most expensive healthcare systems in the world. What is less known is that it is also one of the most dangerous systems. At least, where childbirth is concerned.

USA Today has published these findings, the results of a 4-year long study, and the conclusion is staggering. The maternal death rate in the US, a statistic that has been increasing for years, is now the highest of any country in the developed world. How is it that other countries, most of whom spend significantly less than the US on healthcare, are not confronting this same trend? In fact, in many developed countries, these numbers continue to improve, and you don’t even need to look outside the US to find that this frightening trend is not inevitable.

Against this rising tide of maternal mortality rates, California has cut its maternal death rates in half. While it is the only state to see its numbers on a downward swing, the California example shows that the problem is fixable.

The Dangers Of Childbirth In The US By Numbers

In case this has you worried, the first thing to know is that most women in America deliver their babies without major issues. The study found that about 50,000 American women sustain severe injuries during childbirth, and an additional 700 die. It is believed that number, with the proper practices in place, can be reduced by half.

The numbers alone sound bad enough, but this isn’t happening in a vacuum. Since 1990, the maternal mortality rate has risen from just above 15 per 100,000 births to 26.4. Over that same time period in Canada, England, France, Germany, and Japan, those numbers dropped to below 10 deaths, per 100,000 women. In most other developed countries, at worst, that number has held steady.

What This Means For American Mothers

The primary culprits in maternal mortality are hypertension and hemorrhage. You can expect a woman to lose blood during childbirth, but the simple steps to monitor and find differences between normal blood loss and something more dangerous are not being taken.

Blood pressure is another simple vital sign to monitor and, when applicable, treat with medication. Again, a rise in blood pressure during childbirth and in the hours after is not abnormal, but if left untreated can lead to a heart attack and stroke. While even in the best of circumstances these conditions are not always detected and prevented, it is vital for expectant mothers to use the maternity coverage that insurance companies are mandated to provide.

California Makes Strides When It Comes To Birth

As the statistics in other countries point to, mortality rates that have been falling for years, the problem is fixable, and California is leading the way. As the maternal mortality rate has risen across the rest of the country, in California it is now half of what it once was. Hospitals across the state worked with safety and medical experts to develop a set of guidelines and best practices to combat the problem.

What About The Rest Of The Country?

With the fragmented health system, the US has, hospitals, cities, and states continue with the practices already in place and are slow to look around at what other organizations or governments are doing. The Centers for Medicare and Medicaid Services, the organization with the closest thing to a national regulatory framework that exists in the US healthcare, remains focused on elderly patients and has largely ignored the issue.

The hospital accreditation organization, known as the Joint Commission, is coming around to these rising maternal mortality rates but has also been slow to adopt any regulations, stating a need for more of a national consensus on the issue. The American Hospital Association has tried to fill this void, holding webinars and in-hospital training sessions on these issues, but keeps what it knows about its member hospitals to itself.

Close to 40% of US birth hospitals are enrolled in the group’s reform efforts. It takes time to train and prepare staff before meaningful results can be achieved. It is made more difficult by a system with little national oversight and few regulatory bodies with the reach to affect the entire country. That is one reason individual states, and countries like England with national health systems, achieve results you may not see across the United States. Many of the hospitals enrolled in the AHA program have quietly begun to report improving numbers, but the change is coming too slowly for many.