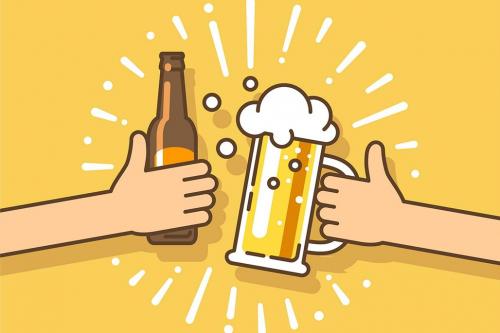 Research Suggests Beer Has Tons Of Health Benefits, So Drink Up!

In honor of International Beer Day, we’ve decided to highlight some of the health benefits of drinking your favorite ales and lagers. Learn what drinking beer can do for your health!

If you’re a beer lover or even just a casual fan of ales and lagers, you’re going to love what we have to tell you. In fact, beer lovers across the globe are cheersing their favorite pint in celebration of research that points to the many health benefits beer provides. So today, on what has been dubbed International Beer Day (arguably the most important holiday of the year), we present you just a few reasons why you should grab a cold brew with your best buds tonight.

Evidence Suggests Health Benefits Of Beer And Other Alcohol

Research suggests that moderate consumption of beer, along with other alcohol and spirits, may have a significant nutritional value that is becoming harder to ignore. In fact, research by the Mayo Clinic and even the National Center for Biotechnology Information has recommended physicians to be aware that moderate beer consumption can be part of a healthy lifestyle. The recommendation isn’t limited to beer either, wine and other spirits have also made headlines for their nutritional value when consumed in moderation. So without further ado, let’s get into it.

Some Of The Health Benefits Of Your Favorite Ales And Lagers

Your favorite brew is a great source of protein, fiber, folate, and helps pump some B vitamins into your system as well, even more so than its more sophisticated counterpart wine. Beer also contains antioxidants that are derived from the hops and barley used in the fermentation process, and research even suggests that pint you’re drinking contains prebiotics. Here’s how these health benefits help you.

Did you know there was such a thing as good cholesterol? Well, there is, and early research shows that participants who drank beer showed a slower rate of decline for high-density lipoproteins (HDL), the good cholesterol, which lowers the risk of cardiovascular disease. So when people say that beer is good for the soul, they can now add the heart.

It seems that China is ahead of the US when it comes to using hops in medical treatment, but hopefully, that will change soon. Researchers from the University of Lanzhou (located in China) conducted studies that suggest one of the compounds found in hops may “delay or prevent the onset of dementia and other cognitive decline.”

Xanthohumol (Xn), the compound in question, has already been found to have tons of beneficial properties. Some of the benefits of Xn help combat cancer, oxidation, and even heart disease. Since this compound is found in hops, it makes sense that beer drinkers are getting a healthy dose, which has been proving to be beneficial for overall health.

Attention pale ale fanatics, this one is for you. You may be familiar with the Got Milk campaigns. you know, the commercials and ads that claimed milk was the best source for strong bones? Well, it seems that milk will now need to split that title with beer, as it’s been shown that beer helps reduce the thinning of bones because it contains “high levels of silicon.” While high levels of silicon are found in the majority of beers, it seems that pale ales contain even higher levels.

Stops Bacteria From Growing On Your Teeth

Hops, one of the primary ingredients in beer, was originally added to beer for its antibacterial and preservation properties. This aided in the shipping of beer back in the day, before refrigeration and whatnot. As an added bonus, the addition of hops to beer also seems to benefit your teeth.

Alright, so this has been known for quite some time now, but still, it’s important to note for anyone hoping to keep those pearly whites sparkling. In 2008, research concluded that Hop polyphenols (HPP) helped prevent dental plaque from forming.

This has been a hot topic within the scientific and medical communities, but new studies have suggested that drinking beer may actually increase an individual’s life expectancy. A study conducted by Claudia Kawas, a Neurologist at the University of California, Irvine, followed the routines and habits of people who live past the age of 90. While she has no explanation for it, Claudia does “firmly believe that modes drinking improves longevity.” Well, even if her results don’t show causation, we’re all for it. We raise this next glass for you!

There’s A Catch - Drinking In Moderation

So, throughout the article you may have noticed that we always mention “drinking in moderation,” and that’s a crucial point. Too much of anything, even something as delicious as beer, can be a bad thing. It’s important to note that these health benefits can quickly turn to health disadvantages if you consume too much alcohol.

So, before you go out drinking with your friends or family tonight, make sure you are drinking responsibly.

How Much Beer You Should Be Drinking

Here’s what you need to know before ordering that 7th round of beer for the table (please note that this may not be accurate for everyone):

Before you jump into a frenzy, let’s take a tool at some of the negative effects of drinking too much beer.

Health Effects Of Consuming Too Much Beer

Drinking too much beer cannot only negate its health benefits but can actually create the opposite effects. For example, while moderate beer drinkers may reduce dental plaque build-up, the acidity in beer when over-consumed can prove to be bad for your teeth.

The same goes for strengthening your bones. A study found that while drinking in moderation can actually prevent osteoporosis and bone thinning, drinking too much beer can have the opposite effect and increase your risk of weak bones. Heavy drinking also has a negative effect on your heart, brain, liver, and pancreas.

While drinking with friends is a fun way to unwind after a long day or work week, be careful with how much you consume. Think about it this way, drinking moderately today will increase the amount you can drink in the future, and maybe one day you can be one of those 90-something-year-olds throwing back a cold one with your buddies on a Friday night!