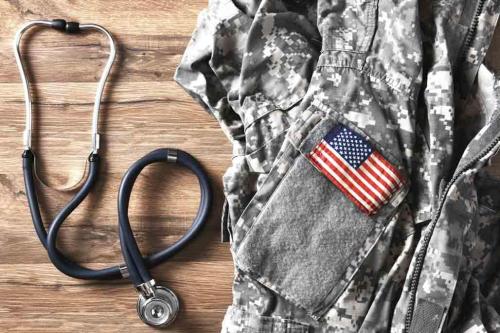 What are the advantages and disadvantages to individual veterans if the Department of Veterans Affairs redirects billions into private healthcare.

The Trump administration inches ever-closer towards delivering on its milestone healthcare reforms promises. In the run-up to the last general election, Trump rallied his core Republican supporters with his promise to categorically deal with the impunity-prone Big Pharmaceuticals once elected to the Oval Office.

Private healthcare for veterans has forever remained a contentious issue pitting the Republicans against Democrats. The Democrats are vehemently opposed to the proposed fixes by the Trump administration. The Dems argue that such a move would exert a heavy toll on the American taxpayers who would be forced to cough up more to cater to the private healthcare cost.

What’s more, the existing private care facilities would really feel the heat from the increased number of patients coming their way. Instead, the Democrats advocate for increasing the medical practitioners in the public sector.

Trump’s rallying call fell under what was aptly dubbed as the 7 Point Plan to overhaul the dilapidated US healthcare system. Under the 7 Point Plan, the US planned to significantly reduce the cost of prescription drugs sold in the US. To actualize that plan, the authorities would have to do away with the staunch limitations currently targeting the overseas drug companies seeking to sell in the US.

Speaking in one of his many campaign rallies back in October 2017, the President remarked that drug companies would no longer be allowed to get away with ‘murder’. The skyrocketing prices for prescription drugs effectively spelled a death sentence to the mostly financially-downtrodden veterans.

Six months later, on the 19th of March 2018, the President revisited the affordable healthcare issue. He’s on record saying that Americans would very soon witness massive price drops for prescription drugs. In the run-up to this month’s upcoming state of the union address, the president is expected to drop the bombshell on the pharmaceutical giants.

Analysts are projecting that the Mission Act could spell loses ranging well into the billions of dollars for these big pharma companies. The major beneficiaries of the proposed budget healthcare law or the Mission Act passed by the last Congress would be the veterans and senior citizens.

According to the New York Times, the decision to shift funds from the government-run VA hospital to the private health care sector will culminate in the biggest transformation for the US VA healthcare niche.

As it stands, veterans and their families have the option of getting personalized and subsidized medical care services under the Tricare Prime plan. Under this plan, the beneficiaries don’t pay a dime out-of-pocket.

The only instance the vets and active duty members are required to pay is when they are on the point-of-service option. However, the family members of these beneficiaries get to pay modest annual enrollment fees and other network co-payments to stay under the Tricare Plan.

The Tricare plan is popular with the veterans as it allows them to use private doctors if they can’t access public healthcare services in their immediate locales.

Advantages Of Redirecting To Private Care

The move to send vets and other active duty staff to private care facilities comes with a myriad of advantages. These include:

Disadvantages Of Redirecting To Private Care

On the other hand, the Mission Act faces vehement opposition from critics led by the Democrats. The latter are opposed to privatizing veterans affairs on the following grounds:

Trump’s proposed fix of the veterans affairs health care has elicited mixed reactions across the political divide. While on one side, the decision is a welcome relief for the ever-increasing number of sick veterans, it comes at a hefty cost for the taxpayers.

Veterans’ services organizations have reiterated their opposition to the Mission Act on the premise that it might effectively siphon off vital development and infrastructure funds to the over 150-year-old sector, VA hospital that was on course to getting face-lifts and other essential improvements will no longer qualify for funding.

The New York Times estimates that the current $60 billion in funding for the Tricare plan will spiral upwards if the Mission Act is enacted. The problem is that Congress would most certainly not approve for extra funding for this essential plan and would instead advocate for downsizing the existing veterans affairs funds to fill the gap.

Dr. Shulkin who is a former veterans affairs services’ secretary calls for a systematic healthcare shift. He firmly believes that the private sector will not be able to handle the influx of patients and as such, the changes should be done in a stepwise fashion.

According to the former secretary, the decision to refer veterans and their immediate families to private medical facilities ought to rest entirely on the government doctors working in VA hospital. He’s all in favor of increasing the number of private healthcare to address the medical needs and wants of the veterans.