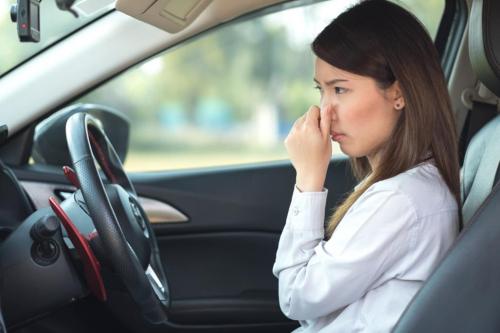 Phantosmia - What Causes Phantom Smells And The Health Implications

Phantosmia, the mysterious case of phantom smells happen more often than you think. If you’ve ever experienced smelling a particular odor nobody else has, you’re not alone, but what does it mean for your health?

Phantosmia sounds like something straight out of a sci-fi thriller, but the reality of the phenomenon isn’t too far off. The condition is very real, and it is connected to a phantom of sorts. However, it is likely not the phantoms you are thinking of. In this case, the phantoms are mysterious smells and odors and recent findings have shown the illness is more prevalent than previously thought.

If you have phantosmia, it essentially means that you smell odors that aren’t real and that no one else smells. In other words, there is no reason or explanation for what your nose senses. Sufferers of the condition report a variety of odors that oftentimes overwhelm their entire sense of smell, blocking out the actual odors around them.

A surprising new study found that close to 7% of Americans over the age of 40 report smelling strange odors from time to time, with no known source. Even more strange for many sufferers of the affliction is that the condition often comes and goes for no reason. In some instances, it may last a few hours, and in the very worst cases, these phantom odors may stick around for years.

Some Of The Most Common Smells

Most sufferers of phantom smells report odors that are highly unpleasant. This includes things like rancid foods, garbage, or the hydrogen sulfide closely associated with rotting eggs. For others, it may be the smell of unpleasant chemicals or the odor of burning material. The list also includes scents associated with unpleasant body odor, wet dogs, dead fish, and feces. Basically, many of the more unsavory odors you can think of are associated with the illness.

What It Could Mean For Your Health

Phantosmia can be a source of distress for those who experience it, as the constant smell can interfere with daily life and disrupt concentration. Additionally, Phantosmia can cause anxiety and lead to social isolation, as many people are uncomfortable being in close proximity when they have an unusual smell coming from them. Finally, the lack of clear-cut treatment options can be disheartening and make Phantosmia difficult to identify and manage effectively. It’s important for those dealing with Phantosmia to seek professional help and support to find ways to manage their symptoms.

Phantosmia may not sound like the worst condition to have, but, underneath its interesting symptoms, the condition may actually signal more serious health problems. While phantom smells are not linked to any specific diseases, the condition is more common in individuals with poor overall health. This includes individuals suffering from migraines and Alzheimer’s. Less frequent episodes of phantom smells have been linked to the onset of seizures, epilepsy, and head trauma.

Besides these specific medical conditions, there are other, secondary effects the condition can have on your overall health and well-being. The ability to smell is often related to taste. As a result, phantom smells can and do interfere with a person’s appetite. If something doesn’t smell good, you are probably less likely to eat it.

These bad smells lead sufferers to avoid food and nutrients beyond what would normally be healthy and necessary. The condition also blocks a person’s ability to smell other odors; things that may signal danger. This includes smoke and gas but also a person’s ability to recognize the telltale odor of rotten food prior to eating it.

Other sufferers come to believe the smell, though nonexistent to those around them, is coming from their own body. This can develop into a form of paranoia that prevents the sufferer from going outside and leads to frequent and sometimes harmful overwashing.

The causes of phantom smells aren’t entirely known with certainty. In addition to the conditions noted above, like seizures and migraines, other indicators include a link between individuals with weight issues or a low quality of life and the condition. The symptoms also appear twice as often in females.

Scientists have conducted MRIs and Cat Scans on patients with the condition, seeking to pinpoint the causes of phantom smells. These findings have led to the suspected linkage with epilepsy as well as tumors and sinus infections. For some sufferers, no culprit has been found. The spells appear for seemingly no reason at all.

Some researchers suggest that in addition to overactive cells in the nose, undetected brain damage may also be one of the causes of phantom smells. The part of the brain that interprets odors could be injured or impaired in those with the affliction.

How To Treat Your Phantosmia

Surgery is an option for treating Phantosmia in some cases, though it is rarely recommended. If the smell is caused by physical obstruction or growth in the nasal cavity, then surgery to remove that blockage may be considered. In addition to surgery, medications such as nasal corticosteroids may also be prescribed to reduce inflammation in the nasal passages. As for insurance coverage, it is best to check with your provider directly to determine if procedures and medications related to Phantosmia are covered. If you want to get more information about treatments and insurance coverage, be sure to get health plan quotes here.

Phantosmia treatment varies from case to case, and there is no known cure. Some patients have found relief with nose sprays, sedatives, antidepressants, and, in certain cases, epilepsy-related drugs used in their phantosmia treatment arsenal.

Doctors have also tried a surgical procedure that treats the olfactory system, and this has provided some benefit to those suffering from phantom smells. There is, unfortunately, no guarantee of a successful phantosmia treatment, and for some, this means learning to live with the mysterious illness.

Covid-19 has been linked to the development of Phantosmia or a phantom smell disorder. The unusual smells associated with this disorder can range from sweet or fruity scents to unpleasant odors such as smoke or chemicals. While the cause is still unknown, some experts believe that it may be related to post-viral inflammation and damage to the olfactory nerves caused by Covid-
19. If you experience a sudden onset of Phantosmia, it’s important to check in with a healthcare provider to rule out other potential causes such as sinus infections and nasal congestion.