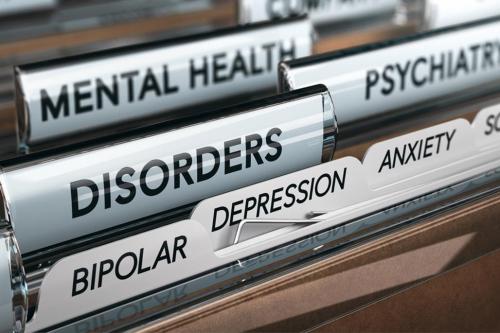 It is estimated that 1 in 6 adults are living with some form of mental illness in the US alone, along with approximately 50% of adolescents aged 13 to 18 years old. Learn about the different types of mental health disorders.

For centuries, there's been debate and stigma pertaining to mental illness. Much of this occurs in the Western world in areas like the United States and parts of Europe. This appears to stem from a mix of certain cultural beliefs and a lack of real understanding of mental health disorders.

What is Mental Illness?

Otherwise known as a mental or psychiatric disorder, mental illness is a mental or behavioral pattern that impacts a person's mood, the way they feel and think. It can affect a person's way of life such as interfering with their relationships and daily routines.

Diagnosing and treating mental health disorders can sometimes be difficult; individuals with the same disorder can experience different symptoms. Nevertheless, there can be over 40 million Americans diagnosed with a type of mental illness in a single year. Also of note is that mental disorders are some of the most costly conditions in the US, much of this related to the medication involved.

What should be noted that mental illness does not always coincide with low-quality mental health. Individuals from childhood to adulthood can experience poor mental health, but it doesn't always lead to a diagnosis of a mental illness.

As of now, there are over 200 classified forms of mental illness. The mental health disorders list range in type from common to rare. Even with the prevalence of this, stereotypes based on old discriminations and stigmas still crop up. There are, however, numerous social movements today based on ending all of that through increased education and tolerance.

The likes of doctors, researchers, health insurance companies have relied on the Diagnostic and Statistical Manual of Mental Disorders (DSM) to create a criteria to classify mental illness in a comprehensive mental health disorders list. Below, the illnesses are separated into common and uncommon.

The following are seen as common mental health disorders:

Addiction/Impulse Control Disorders: These disorders concern a struggle with resisting urges that can cause yourself or others harm. Alcohol/drug dependence, kleptomania, intermittent explosive disorders (IED) are just a few of the associated conditions.

Anxiety Disorders: Though anxiety is a normal reaction, once it's overwhelming and impacts your life, it turns into a disorder. Signs include sweating, insomnia, feelings of dread, and more. Some conditions are social anxiety disorder, phobias, and generalized anxiety disorder (GAD).

Developmental Disorders: These utilize a broad group of psychiatric conditions that originate in childhood. It deals with a crucial impairment in one or more specific areas. Conditions such as attention deficit hyperactivity disorder (ADHD), autism, and other neurodevelopment disorders.

Eating Disorders: This is associated with people adopting negative behaviors and attitudes toward food and their weight. The most well-known types are anorexia nervosa, bulimia nervosa, binge eating disorder, and pica.

Mood Disorders: Also known as Affective Disorders, these are a set of psychiatric diseases. When it comes to common mental health disorders, perhaps the most recognized kinds are depression and bipolar disorder (BD). Other conditions include major depressive disorder (MDD), substance-induced disorder, and dysthymia.

Obsessive-Compulsive Disorders (OCD): OCD was previously housed under anxiety disorders, but the DSM updated it into its own chapter. OCD deals with an urge to perform routines repeatedly, check things repeatedly, or have the same thoughts to the point of obsession. Conditions include hoarding disorder and trichotillomania (hair pulling disorder).

Post-Traumatic Stress Disorders (PTSD): PTSD is a condition in which people have frequent mental and emotional stress following a traumatic event. Similar to anxiety, it's typical to experience several reactions following any type of trauma, but a person can be diagnosed with PTSD if they cannot recover.

Below is a brief mental health disorders list of uncommon conditions:

Dissociative Disorders: Those with dissociative disorders suffer from a disconnect pertaining to identity, memory, and consciousness. As defined in the DSM, there are three main types: dissociative amnesia, dissociative identity disorder (formerly known as multiple personality disorder), depersonalization-derealization disorder.

Somatic Symptom Disorder: This disorder is characterized by experiencing physical symptoms of injury or illness that can usually not be explained or diagnosed. Those who suffer from this usually have excessive distress about their symptoms.

Stress Response Syndromes: A person with this developed certain behavioral and emotional symptoms that follow a stressful event. This can be anything from a personal crisis or a natural disaster. Unlike PTSD, those with stress response syndromes usually end within six months or so once the source of the stress has gone away.

Whether they are common mental health disorders or rare ones, figuring out the causes remains a challenge. Doctors and researchers have yet to find an exact cause for all mental health conditions, but over the years, the direction has led to a combination of environmental, biological, and psychological aspects being a factor.

Researchers have looked plenty into biological aspects when it comes to finding mental health disorder causes. These include prenatal damage and genetic factors.

Concerning mental health disorders in adults, it is estimated that 1 in 6 adults are living with some form of mental illness in the US alone. Some of the conditions that usually manifest in adulthood include mood disorders, anxiety disorders, and psychotic disorders.

Over 60% of American adults can seek treatment in any given year. Those who seek treatment can see a greater amount of healthcare as well due to the Mental Health Parity and Addiction Act. It's known to be a good step for those who suffer from mental illness.

Likewise with adults, kids can suffer from mental health disorders. However, diagnosing children's mental disorders is not simple. Children are often unable to ask for help, so they must rely on the adults in their lives to recognize symptoms. Statistics have shown that in the US, about 50% of adolescents aged 13-18 have been diagnosed with some form of mental illness.

It not only helps to learn the various types of mental health disorders but also some of the warning signs that may come with them. Some of them are laid out below:

There are some particular signs to watch out for in kids that can be early signs of children's mental health disorders: