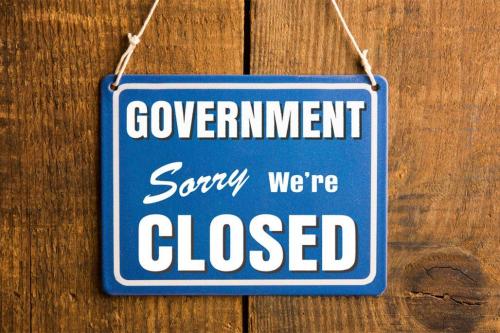 How the Government Shutdown Affects Your Healthcare

It's no surprise that this country is divided along party lines. Republicans and Democrats rarely see eye to eye, and typically take their war of words and ideologies to the floor for heated debates. Every so often these debates get taken a little too far and the entire government stops working. Literally, there is a government shutdown which we just saw happen again.

So what does happen during a government shutdown? What federal programs are paused and which aren't? Most importantly, how is your healthcare affected?

Thankfully, the government shutdown effects on healthcare were fairly limited during the weekend, but if it were to have continued, hundreds of thousands of federal agencies would have been affected.

There would be payment delays for the federal contractors, preparations will slow for the tax season by the IRS, and the healthcare system will be making serious adjustments. Approximately 41,000 of 82,148 HHS employees would still be working. Only 50% of workers at Defense and Transportation, Veterans Affairs, Homeland Security and Justice would be able to work.

Healthcare Services that Continue During the Government Shutdown

Medicaid payments will still be received by the states. Federal funding is secure through June 30th for low-income health insurance programs due to the contingency plan. Since the enrollment is overseen by the individual states, there are no issues expected for individuals enrolling in the programs.

Senior citizens will be able to continue with appointments with their physicians. Medicare and Medicaid both have funding sources not reliant on the Democrats and Republicans in Congress passing the annual bills for spending. The effects of the government shutdown should not be felt by the beneficiaries unless it continues for a substantial length of time. Medical providers will be reimbursed by Medicare, so there should be no interruption in coverage.

The premium subsidies for Obamacare will continue for the enrollees. For individuals qualified to enroll off-season, the marketplace will be open. Just like with Medicaid and Medicare benefits, marketplace subsidies are deemed to be mandatory spending. Eligibility for Medicaid and Medicare Services will be using the leftover fees the health insurers paid to ensure enrollment will continue.

Drug reviews will continue with the Food and Drug Administration because the pharmaceutical industry is paying the fees for the reviews. According to HHS, the employees who review and analyze the medications that enter the United States are considered essential personnel.

All 1,400 community health centers in the nation will remain open. These clinics provide dental services and preventive care to approximately 27 million low-income individuals and have mandatory spending status. These centers are still under threat because the program requires the Republicans and Democrats in Congress to reauthorize the bill. It is still unclear if this will be included in a government spending bill.

Healthcare Services that Slow or Stop During the Government Shutdown

The food and safety program of the FDA is being paused. According to the HHS contingency plan, the FDA will not be able to support most of their cosmetics, nutrition, and food safety activities. The exception is the inspections for poultry and meat conducted by the Food Safety and Inspection Service of the Agriculture Department.

No new patients can be enrolled by the National Institutes of Health for clinical trials, and there will be no actions taken regarding any applications for grants. During the course of the last shutdown, 200 patients were turned away by the NIH every week from their center for clinical research. This was due to almost three-quarters of their staff being on furlough. The only new patients that will be admitted to the center must be deemed as medically necessary by Francis Collins, the Director of the NIH.

There will be no new grant awards for social services or mental health, and the existing grants will receive less monitoring. The HHS departments with the most involvement in issuing healthcare providers grants all over the country have a much higher degree of furloughed employees. This includes the Administration for Children and Families and the Substance Abuse and Mental Health Services Administration.

The payments will stop for senior nutrition programs. The shutdown is halting the funding for programs funded by the Administration for Community Living for senior nutrition. Privately run programs will see a delay in federal reimbursements including Meals on Wheels. This program is currently serving in excess of 2.4 million seniors all over the country. The severity depends on the length of time the shutdown lasts.

There will be a slowdown in the response given to the deadly flu outbreak this year. According to the CDC, there will still be an immediate response to seasonal influenza and urgent outbreaks of disease. This includes data collection reported by hospitals, states, and other sources. It is possible these reports will be issued much slower than normal. According to Tom Frieden, the former Director of the CDC, there was a slower response during the shutdown in 2013.