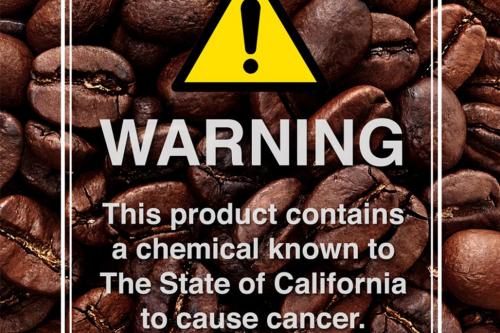 Coffee Cancer Warning - Is Acrylamide Really Cause For Concern?

A California Judge ruled last week that any coffee sold in the state would need to be accompanied by a cancer warning label, similar to those found on cigarettes. The National Coffee Association, including Starbucks, is looking to fight back.

Following a ruling by a California Judge, any coffee sold in the Golden State will now come with a cancer warning label, similar to the ones you find on cigarettes. The ruling is already causing a stir with major coffee sellers in the state, which include Dunkin Donuts and Starbucks, who are looking into appealing the decision or take legal action. While the new coffee cancer warning in California is currently isolated to the state, it’s been shot into the national spotlight, making coffee lovers everywhere consider healthier alternatives, but just how seriously should this new ruling be taken?

In 2010, the Council for Education and Research on Toxins filed a lawsuit against Starbucks, and other members of the National Coffee Association (NCA). The lawsuit claimed that coffee sellers were not doing their part in warning coffee drinkers about the risk of being exposed to a known carcinogen, acrylamide. The judge had no choice but issue the following ruling:

Since defendants failed to prove that coffee confers any human health benefits, defendants have failed to satisfy their burden of proving that sound considerations of public health support an alternate risk level for acrylamide in coffee.

The National Coffee Association is already looking to fight the decision.In a released statement, the NCA claimed that the “cancer warning labels on coffee would be misleading.” The statement goes on to point out that “the US government’s own Dietary Guidelines state that coffee can be part of a healthy lifestyle.” All signs are pointing to a legal battle looming between California and coffee sellers.

Acrylamide is a natural chemical that forms from sugars and Asparagine, an amino acid, found in foods. It’s also possible for Acrylamide to form when starchy foods are cooked at high temperatures, which causes the chemical reaction to take place and form Acrylamide. The roasting process of coffee beans is what causes Acrylamide to form in coffee.

According to the American Cancer Society, Acrylamide can be found in cigarette smoke, and is sometimes used the process of making plastics, as well as treating drinking water and wastewater.

Does Acrylamide Cause Cancer?

Acrylamide is listed as a cancer-causing agent, or carcinogen, by the state of California. However, the International Agency for Research on Cancer (IARC) only lists the controversial chemical as a “probable human carcinogen.” The reason Acrylamide is only listed as a probable carcinogen is that it showed an increased risk of cancer in lab animals, but inadequate results in humans. It is important to note that the study took place in 1994 before Acrylamide was discovered in food. So yes, it is highly likely that Acrylamide causes cancer.

Is It Time To Put Down The Coffee?

John Ioannidis, who just happens to be a professor of medicine, health research, and policy at the prestigious Stanford University, doesn’t think so. When asked about the new ruling, and coffee’s link to cancer, John stated that he wasn’t the, “least bit concerned about coffee being a problem for causing cancer.”

He claims that while it’s true, coffee does contain the carcinogen Acrylamide, it’s an extremely low dose, which isn’t a cause for concern. He went on to point out “among the zillions of things that surround us, coffee is among the most safe in terms of cancer risk.”

You can expect, especially with Starbucks, Dunkin Donuts, and other major names involved in this case, that extensive studies and research will be taking place. A coffee cancer warning sounds scary, and shouldn’t be taken lightly, but the following weeks should bring about more clarity on the subject.