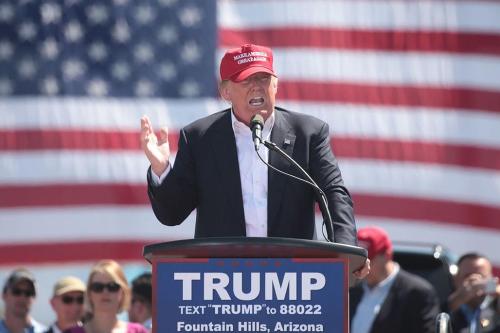 One of the top priorities Trump mentioned during his campaign was a vow to eliminate the Affordable Care Act (ACA) and replace it with his own healthcare reform plan. That plan came in the form of the American Health Care Act (AHCA).

One of the top priorities Trump mentioned during his campaign was a vow to eliminate the Affordable Care Act (ACA) and replace it with his own healthcare reform plan. That plan came in the form of the American Health Care Act (AHCA).

Trump took a hands-on approach to the health reform in order to push it through Congress in the face of opposition from opponents both Democratic and Republican. Learn all about the American Health Care Act 2017, including its goals, pros and cons, and more below.

What is the AHCA?

In the simplest of terms, the American Health Care Act is a U.S. Congress bill designed to repeal and replace the ACA created by the former President Obama Administration. However, it is not set to repeal each aspect of the ACA.

The AHCA aims steadily make critical changes to some of the features. To use some examples, it addresses how consumers purchase insurance, doing away with Medicaid expansion, etc. A copy of the proposed legislation for the American Health Care Act 2017 is available to read online for those interested in a comprehensive look at President Trump’s first attempt at healthcare reform.

Who Wrote the AHCA and When?

The initial American Health Care Act 2017 was drafted by House Republicans. It was first introduced to the House Energy and Commerce Committee and the House Ways and Means Committee in early March of that year. Immediately following its introduction, President Trump, along with his Administration, announced their backing and support of the AHCA.

What Are Its Goals?

Primarily, the goal of the American Health Care Act was to repeal and replace the ACA. In addition to that, the bills would eventually serve as a vehicle of sorts for other proposals from some Senate Republicans.

One of the first goals brought up when the American Health Care Act came to the Floor was to get rid of the individual mandate from the ACA. That mandate made it so that Americans would face a penalty if they could not provide proof of health insurance coverage.

However, the AHCA wound up having its own version of the individual mandate. They included a penalty for those who do not get coverage; these individuals would see a surcharge of up to 30% when they try for health insurance after a lapse of coverage.

Additional goals claimed by the American Health Care Act include creating a “stable transition to a patient-centered system” and provide more choices for health insurance coverage as well as lower costs. The AHCA also desired to allow states the ability to opt-out when it comes to providing essential health benefits from the ACA.

Another key priority from the AHCA would be to prohibit federal funding to Planned Parenthood. That would cut costs to things such as reproductive health and child health services. When it comes to abortions, the AHCA has plans to introduce a partisan bill to restrict abortion coverage for private insurance companies.

The American Health Care Act includes a number of features that both add to what is already in place from the ACA while removing other items. A good way for anyone to have an idea what is in store from this healthcare reform is through a quick, yet thorough, summary.

To begin, the American Health Care Act keeps critical patient protections as put in place by the ACA. Subsidies based upon income would continue following a different guideline, marketplaces would go on as well, and the requirement for dependents to remain on their parents’ plans until 26-years-old remained in place also.

As previously mentioned, there would be a version of the individual mandate. The penalty for it could go lower, higher, or remain the same compared to the ACA based on the length of time without insurance as well as your premiums.

Some Medicaid required benefits would be expanded upon, while others such as addiction services would no longer be required. Federal support for Medicaid with caps on coverage would also be reduced.

This Health Care Act would cut out tax credits to small businesses by 2020, while large employers would no longer face a fine if they don’t provide health plans.

Younger individuals using an individual plan may see lower premiums while older Americans can see higher ones due to the adjustments on the premiums providers can charge. Within the individual plans from the ACA, the American Health Care Act would eliminate bronze, silver, and platinum levels.

With Planned Parenthood, federal funding would be prohibited for one year. This is mostly the case when it is through Medicaid.

As to what can count under AHCA pre-existing conditions, this can be determined by specific insurers. There are certain ailments to be found that have universally been used to deny people coverage. These include the likes of mental disorders, diabetes, arthritis, cancer, obesity, and more.

It is unclear just how much the AHCA pre-existing conditions rules will increase charges for certain individuals. However, it was estimated, for example, that those with metastatic cancer may see more than a 3,000% increase for coverage.

To wrap up the American Health Care Act summary, the way this affects you largely depend on the way you get your insurance, what type you need, and your income.

Pros Of The AHCA

Under the Health Care Act, some individuals may see the following advantages:

Cons Of The AHCA

As with all things, there are disadvantages noted by the opposition when it comes to this Health Care Act:

The House and Senate Vote

In the beginning, both Committees voted party-line to approve moving the bill with it eventually reaching the Floor of the House on March 16, 2017. There were recommendations of changes, and a number of amendments were introduced. By March 24th, the House failed to hold a vote.

Afterwards, a new version of the American Health Care Act 2017 was introduced with several amendments. Through a narrow vote of 217 to 213, it passed Congress.

Concerning the Senate vote, they drafted a number of their own bills amongst the previously adjusted American Health Care Act. By the time voting occurred, dubbed by many as the Senate Vote-O-Rama, those bills failed to pass.

To this day, the American Health Care Act 2017 continues to see amendments introduced in an effort for Trump to fulfill campaign promises. Many of these regulations such as the AHCA pre-existing conditions process are also put in place to pick apart the ACA. Until then, and as long as opposition remains, the road for healthcare reform does not appear to be ending in the near future.