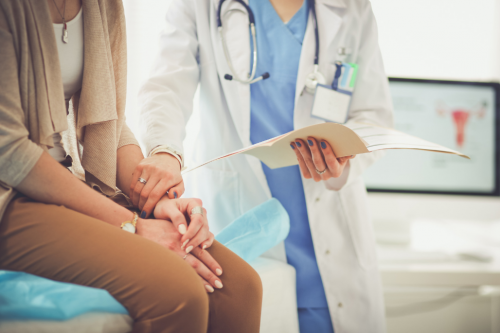 5 Most Common Cancers In Women

Cancer is a common disease for both men and women. The top five vary between sexes, continue reading here to learn the most common cancers in women.

Cancer is a common disease and one of the most dangerous diseases that one can be afflicted by. For women, there are a number of cancer forms that are particularly common and regular check-ups should be sought out to quickly identify whether or not a woman has cancer.

In this article, readers will discover the five most common forms of cancer in women. Beyond just acknowledging these horrible conditions, you will learn information such as the symptoms that appear when a person has a form of cancer and general statistics that correlate to cancer’s effects. Also, readers can find a number of ways to reduce their risk of developing each form of cancer that is discussed.

Breast cancer is defined as a group of malignant cells that form together in the tissues of the breast. As the second leading cause of cancer-related deaths in women, the cancer is not to be taken lightly. Luckily, there are a number of treatment options available for breast cancer if it’s caught early enough. If the cancer is not caught soon enough, death is a possibility.

The treatment methods are often very similar to the traditional methods used to treat other forms of cancer, but one form of treatment carries an unnecessary stigma behind it. In certain cases, a mastectomy is performed to surgically remove the breast that is afflicted by cancer. Often, both breasts are removed.

According to the National Breast Cancer Foundation, one in every eight women will be diagnosed with this form of cancer during their lifetime. Women are usually diagnosed with this cancer between their forties and sixties, but the condition isn’t unheard of in younger women. Children can sometimes develop this cancer, but it’s considered to be extremely rare. The five-year survival rate for this cancer is 90%, while it varies by stage.

Cancer of the breasts can come without symptoms, but the most common symptoms that do appear are discomfort in the breast, inverted nipples, swelling of the breasts, lumps, soreness, and swollen lymph nodes.

You can reduce your risk of developing cancer in your breasts by taking a few precautions. You can limit alcohol intake, refuse to smoke, breastfeed your child, take on healthy dietary habits, and receive regular medical screenings on your breasts.

Like all cancers, cervical cancer is the rapid and uncontrollable growth of malignant cells in the cervix. Cervical cancer doesn’t begin from cancerous cells, though. The cells of the uterus first take on pre-cancerous changes and eventually become cancerous.

Cervical cancer is considered to be one of the five most common cancers in women. However, it’s considered to be a rare form of cancer. Only, 200,000 women are predicted to be afflicted with this cancer each year. Most women discover their cancer early and the five-year survival rate is 92%. Allowing women to surpass the five year survival time. It’s also worth noting that cancer of the cervix is often caused by HPV.

Cancer of the cervix can be prevented in a number of ways. First and foremost, wearing a condom can prevent HPV. HPV can be completely harmless on its own, but it can lead to this cancer. Normal healthy habits such as not smoking, limited drinking, and eating right can also reduce the risk of developing cervical cancer.

Ovarian cancer develops in the ovaries. The ovaries are the part of the female reproductive organs that produce eggs. The cancer is often treatable by chemo or radiation, but the use of a hysterectomy is fairly common. A hysterectomy is a surgical procedure that is done to remove the uterus in its entirety.

Ovarian cancer is common in women over forty, but it’s not unheard of in younger women. In extremely rare cases, children can be afflicted by it. It’s considered to be rare. Less than 200,000 cases are reported each year. In theory, the cancer is easily treatable in women and if it is found early, there is a 92% five-year survival rate.

However, it’s not found early most often and the chances of long-term survival are lower in older women.

The usual methods of eating healthy and refraining from alcohol and tobacco use apply to ovarian cancer, but there are some other methods, too. Pregnancy, breastfeeding, and the use of birth control pills are all linked to a lower risk of ovarian cancer.

Endometrial Cancer is cancer found in the lining of the uterus. Most often, the cancer is treated by chemotherapy or a hysterectomy.

While it’s not unheard of for younger women to develop endometrial cancer, the average woman with the condition is sixty years old. The cancer is most common in white women. However, black women are more likely to die from it according to the American Cancer Society. The average five-year survival rate for this cancer is 90%.

Pain in the uterus during sex, vaginal bleeding, and fatigue are all symptoms of this cancer.

The best-known way to prevent this cancer is to eat healthy food and exercise. Also, smoking and drinking are major risks.

Lung cancer is the formation of malignant tumors in the lungs. Lung cancer is the most common cause of cancer deaths in the world for women and men. While smoking is the top cause for this cancer, it’s not exclusive to smokers.

The symptoms of this cancer include shortness of breath, bloody mucus, weight loss, fatigue, wheezing, and repeated cases of bronchitis or pneumonia.

The biggest way to reduce one’s risk is by not smoking. Second-hand smoke is another major risk factor and should be avoided. Beyond not smoking, the risk of this specific cancer can be dramatically lowered by eating fruits and vegetables, exercising, and avoiding carcinogens.