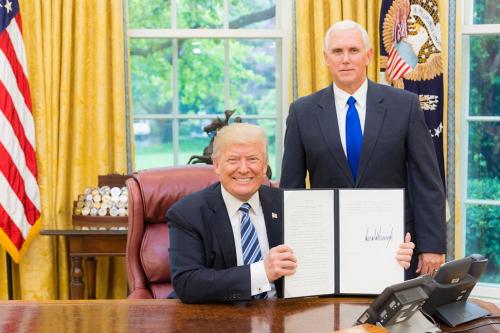 President Trump signed the Tax Cuts and Jobs Act of 2017 into law on December 22, 2017. It was the first major victory for Trumpcare.

While the Tax Cuts and Jobs Act is referred to as a massive tax-overhaul, the bill contains pieces of legislation that are directly, and indirectly affect the US healthcare system. Here’s a look into the first official Trumpcare bill, and how it will affect your health expenses in the coming years.

How The Tax Cuts And Jobs Act Will Directly Affect Healthcare

Taxes and healthcare in the US are, for the most part, intertwined. Under the Affordable Care Act, there was even a tax penalty implemented for those who chose not to get health coverage. Healthcare expenses are also tax deductible under certain circumstances, and Medicaid and Medicare are government healthcare subsidy programs, funded directly by taxpayer dollars. Here’s a look at how the bill will directly affect healthcare in the US.

1. End Of The ACA Individual Mandate

The Affordable Care Act’s requirement to purchase health insurance has run its course. The Tax Cuts and Jobs Act eliminated the individual mandate, and starting in 2019, you will no longer be required to be covered. However, if you don’t have health insurance in 2018, you may still have to pay a tax penalty. See what your tax penalty may be with First Quote Health’s Obamacare penalty calculator.

There were a multitude of new tax policies put into place by the Tax Cuts and Jobs Act, and that included hospitals and healthcare facilities. First, hospitals that are tax-exempt will now have to pay a new 21% excise tax on employees who are paid over $1 million. Though the excise tax doesn’t apply to medical services. According to Modern Healthcare, the same hospitals will also no longer be allowed to “offset income from unrelated business activities with losses from other unrelated business activities."

How The Trumpcare Bill Will Indirectly Affect Healthcare

As mentioned before, there are many moving parts to the US healthcare and tax system, and some of the changes under the Tax Cuts and Jobs Act of 2017 will indirectly bring about changes. Some of those changes include the following.

Right now, the local and state taxes you pay can be deducted from your federal tax. However, under the Tax Cuts and Jobs Act you will be capped on the amount of deductions you are allowed to file for through 2025. The bill caps deductions for state and local taxes at $10,000 for and individual, and $5,000 for married individuals filing separately. While this doesn’t directly affect your healthcare, it may force states to lower taxes, which would cause cuts to state health services and programs.

In 2010, Congress passed a law that would prevent the federal deficit from growing too much. The law was is called Statutory Pay-as-You-Go Act, commonly referred to as PAYGO, and automatically goes into effect if the the deficit increases by $1.5 trillion over a 10 year period. The Congressional Budget Office (CBO) is projecting that the Tax Cuts and Jobs act will trigger PAYGO, and federal programs like Medicare would see cuts to funding.

When the individual mandate gets repealed, it’s estimated that around 13 million Americans would drop or lose their health coverage. This would ultimately lead to hospitals treating more uninsured patients, which would reduce compensation for medical services provided. Hospitals do offer financial assistance, but in order to meet the higher demand for uncompensated care, it would likely result in healthcare facilities tightening their assistance for people who qualify for government healthcare programs but don’t have coverage.

It’s easy to see why the Tax Cuts and Jobs Act is being hailed as the first official Trumpcare bill. Between the changes it is making to healthcare directly and indirectly, it will surely shape the future of healthcare in the US.