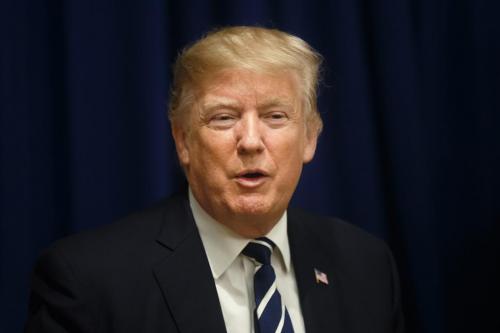 President Trump is looking to cut federal spending in light of the pushback from his approval of the Omnibus Bill. Political leaders on both sides are shocked and concerned about the plan to cut funding for the Children’s Health Insurance Program.

President Trump may be one of the most polarizing political figures in our nation’s history, and his presidency has been shrouded in controversy. However, while most of the scrutiny came from the left, Trump did get some pushback from his own party after approving a bipartisan tax overhaul known simply as the Omnibus Bill.

The Omnibus Bill was no small overhaul either. The bill, which President Trump originally threatened to veto, included spending approval for border security, the IRS, the opioid crises, and more to a tune of $1.3 trillion. After the failed campaign promise of repealing and replacing the Affordable Care Act, Trump came under more fire from his party for going back on his other campaign promise of slashing federal spending and reducing our federal deficit.

In what can only be described as damage control, President Trump is looking to cut federal spending elsewhere. However, his most recent spending proposal would come at the expense of the Children’s Health Insurance Program (CHIP), which has understandably angered quite a few people.

What Trump Is Proposing

According to reports, Trump is planning to send a proposal to Congress that would retract $15 billion in spending that had already been approved by the administration. Of that $15 billion, about $7 billion would come from CHIP, and many political leaders are voicing their disapproval. None more so than Democratic New York Senator, Charles Schumer, who had the following to say.

“Let’s be honest about what this is: President Trump and Republicans in Congress are looking to tear apart the bipartisan [CHIP], hurting middle-class families and low-income children, to appease the most conservative special interests and feel better about blowing up the deficit to give the wealthiest few and biggest corporations huge tax breaks"

It’s not just Democrats who are speaking out against funding cuts to a health insurance program that provides healthcare access to 9 million children from low-income families, some Republican leaders were voicing their concerns as well. Among them is Susan Collins, Republican Senator from Maine, who was actually one of the co-sponsors for CHIP. It’s important to note that there’s more to the story that many media outlets are leading you to believe.

Headlines Are A Bit Misleading

Yes, there would be cuts made to the Children’s Health Insurance Program, but not to the extent you may think. The cuts would come from two different accounts under CHIP, $2 billion from the special contingency fund, an additional $5 billion from the program’s budget authority.

Essentially, the contingency fund can be described as a rainy day fund, meaning that the money is only used in case of an emergency. For example, the contingency funds would become available if states were to run out of CHIP funds. In regards to the budget authority fund, that can only be used without authorization from Congress, so while the funds from the budget authority account would no longer be available, it really doesn’t count as a spending cut.

Some experts are saying that it is unlikely the proposed funding cuts would go through. However, the fact that Trump is attempting to reduce the federal deficit and Omnibus Bill spending will come at the expense of a bipartisan children’s healthcare program is a bit concerning. The healthcare system may be broken, but the Children’s Health Insurance Program has done a lot for low-income families, including reducing the uninsured rate for children from 14% to 5%.