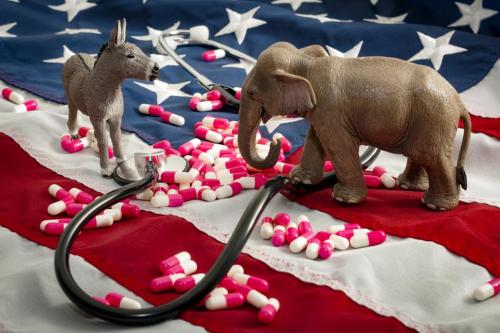 The Skinny Repeal Fails In Another Blow To The GOP

The Skinny Repeal failed to pass as 3 Senate Republicans voted against the bill. This comes as another blow to the GOP's hopes of healthcare reform.

What Is The Skinny Repeal?

The Skinny Repeal, or Health Care Freedom Act, is the healthcare bill that was voted on in the Senate on July 28, 2017.  This bill ultimately failed to pass with a close margin of 51 votes to 49 votes, which included 3 Senate Republicans who voted against passing the Bill.

The Controversy With The Skinny Repeal

One of the biggest contributing factors to why the Skinny Repeal did not pass was its lack of structure.  Even members of the GOP were unsure what policy changes would be included in the health bill.  Whether this was a clean repeal of Obamacare or a modified version remained a mystery until just hours before it was brought to the floor for a vote.

On the other side of the political spectrum, the DNC felt the Health Care Freedom Act was putting millions of Americans at risk of losing health coverage.  This came after the Congressional Budget Office, or CBO, published their findings noting that upwards of 16 million Americans could find themselves without health insurance.  This moral stance, accompanied by the lack of new policy solidified how the Senate Democrats would cast their votes.

Included below are some of the key policies that would have been in effect if the Skinny Repeal was passed by the Senate.

Many opponents of the Affordable Care Act see the Individual Mandate as unconstitutional, even though it was upheld as constitutional by the Supreme Court in National Federation of Independent Business vs. Sebelius.

However, many still feel that the Individual Mandate infringes on individual liberties by requiring someone to purchase a good or service they may not want or need, and eliminates free market competition.

Loss Of The Employer Mandate

Just like the Individual Mandate, the Employer Mandate would also be eliminated under the Skinny Repeal.  The Employer Mandate was implemented with the Affordable Care Act, and requires businesses with 50 or more employees to offer health insurance plans to full-time employees, or face a penalty.

The bill would have moved funds from Planned Parenthood services to community health centers. This likely would have reduced the quality and availability of Planned Parenthood's services, which about 2.4 million Americans rely on for sexual and reproductive services each year.  This was a main point of conversation because the left is overwhelmingly against defunding Planned Parenthood.

Repeal Without A Replacement

It's important to note that the Skinny Repeal was quite different from a repeal and replace of Obamacare. Rather than replacing Obamacare, the Skinny Repeal would have eliminated some policies which have been touched on in this article, and ultimately reduced Obamacare’s effectiveness. It is unclear whether the GOP would have ultimately passed any sort of replacement for The Affordable Care Act which could have left the healthcare industry scrambling.

Proponents of the Skinny Repeal

Many conservative legislators felt that this bill would act as a stepping stone towards a more comprehensive repeal and replace of The Affordable Care Act with a freer market-oriented healthcare system. These legislators believe that a freer market-oriented system could improve the quality of healthcare. However, Democrats and some conservatives do not hold this philosophy.

Furthermore, many conservative and democratic legislators feel that The Affordable Care Act has budgetary flaws that would make it unsustainable for the future. These legislators have voiced concerns that the entire health system in the U.S. would collapse if no changes were made to Obamacare.

Why Did The Bill Fail?

As touched upon earlier, the GOP is quite fractured on the issue of healthcare. Some members of the GOP wish to see a clean repeal of The Affordable Act or a new bill that involves very minimal government oversight.   They argue a clean repeal will create a free market that will, in turn, see lower health costs.

However, other members of the GOP hold a more moderate stance and want some aspects of the ACA to remain in place, and are happy with the Skinny Repeal. Republican legislators have unsuccessfully attempted to come up with a bill that brings these two groups of the GOP together.

GOP Members Against The Bill

Senator John McCain of Arizona, who had recently been diagnosed with a brain tumor, made a quick and stunning return to the Senate floor.  McCain was met with overwhelming backlash just days earlier when he voted to bring the Skinny Repeal to a vote, although his immediate speech alluded that he was not in favor of the Skinny Repeal.

As everyone else had cast their vote, the tally remained at 50 votes against, and 49 votes for the new health bill and all it needed was 1 more vote to pass.  When McCain came forward to cast his vote, all eyes were on him as he held a neutral hand up just long enough to build the tension, before giving the final thumbs down that killed the Skinny Repeal.

For the moment, there have no changes to the legislation. However, this doesn't mean that changes won't occur in the future. The Republican party is currently divided on how to proceed. Some members of the GOP feel that the party should continue to pursue a complete repeal. Others feel that the party should begin to focus their attention on other issues instead of healthcare.

However, there is one thing that is clear.  President Trump is not done with his attempt to implement a complete repeal of Obamacare, which he made evident with a tweet on July 29, 2017, which read:

“Unless the Republican Senators are total quitters, Repeal & Replace s not dead!

Demand another voter before voting on any other bill!”

The Senate Better Reconciliation Act was an earlier bill proposed by Senators Lindsey Graham, Dean Heller, and Bill Cassidy. This piece of legislation would have some similarities to the AHCA, but it also would keep some segments of The Affordable Care Act. The proposed bill is called The Senate Better Care Reconciliation Act. This bill is designed as an amendment to The Affordable Care Act.  Here are a few important things to know about it:

Both the individual and employer mandates would be completely eliminated. Furthermore, states would have more of an ability to waive federal insurance mandates. This would give individual states a larger amount of control over the healthcare system.

Everyone who is able to get Medicaid currently would be able to receive it under this bill, but the coverage would be more limited than it is today. Most aspects of Medicaid would include an individual coverage cap. In addition, there would be cuts to coverage for those with disabilities, families, and seniors. Furthermore, the cuts would increase over time.

The enhanced Medicaid expansion would not occur under this bill. This was set to begin in the year 2020, and it would help to cover a significant number of people.