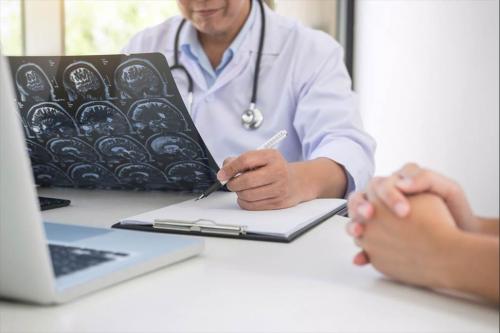 The death of Luke Perry at 52 years old shocked the nation. How could someone that young suffer from a stroke? Learn more about the causes and symptoms of strokes.

So you may ask yourself, what is a stroke? A stroke is an illness that results from an interruption of blood flow to the brain. Most types of strokes are caused by a sudden blockage of arteries that lead blood to the brain. Other strokes are caused by excessive hemorrhage that occurs in the brain tissue. This transpires when a vessel bursts. Since stroke is rapid, it can also be referred to as a brain attack.

Generally, the effect of a stroke will depend on which part of the brain is affected and how severe the injury is. The following are the different types of strokes.

Ischemic strokes occur when an artery in the brain is blocked hindering the free flow of oxygenated blood. Arteries are the primary supplier of fresh blood to the brain. Oxygenated blood is collected from the lungs, taken to heart, and then pumped to the brain. The blood carries not only oxygen but also the nutrients necessary to sustain the brain.

The stroke is due to narrowing of arteries especially those that supply the neck and head. Atherosclerosis which can also be referred to as cholesterol deposition in the arteries is what causes the vessels to narrow. When the arteries are thin, the blood cells are not well collected which leads to blood clots. Once cells clot, it causes thrombosis.

This is a stroke that transpires when there is an ailing vessel that is essential for the brain. After a burst occurs, blood leaks inside the organ. The name of this stroke suggests the burst occurs within the cerebrum. Afterward, there is a sudden increase in pressure that causes severe damage to the cells of the brain that are around the damaged vessel.

If the amount of blood being supplied increases, there will be an automatic pressure build up that can render the patient unconscious or even cause death. intracerebral hemorrhage typically occurs in particular sections of the brain which include the brain stem, basal ganglia, cerebellum, or the cortex. The common cause of this stroke is hypertension.

High blood pressure build-up doesn’t display any symptoms, and many patients that have intracranial hemorrhage will never be alarmed that they need immediate treatment. Other minor causes of intracerebral stroke include tumors, trauma, infections, blood clotting, abnormalities of blood vessels, and other deficiencies.

This stroke happens when a blood vessel that is outside the brain bursts. The space around the skull which is known as subarachnoid space is rapidly filled with blood. A patient with this type of hemorrhage may experience neck pains, intense headache, vomiting, and nausea. According to neurosurgeons, this headache is the worst in a human’s life.

The increasing pressure from outside being exerted on the brain may cause unconsciousness or even death. This stroke is due to abnormalities of arteries that are located at the base of the brain. It’s referred to as cerebral aneurysms. The part has small, irregular, and rounded swellings in the arteries. If these swellings become severe, the blood vessel may be weakened and rupture.

This can be recognized as an acronym or a mnemonic that is applied to enhance and detect the response of stroke patients. FAST stands for F - Face drooping, A - Arm weakness, S - Speech difficulty, and T - Time to call 9-1-1. If you feel like you are having a stroke think of the word FAST to quickly diagnose yourself and get help.

Many risk factors cause a stroke. Most stroke causes can be controlled. Here is a list of some causes that may lead you to be at a higher risk of having a stroke.

The following are independent risk factors that cause a stroke.

Stroke treatment requires the medical team to carry out an appropriate diagnosis which will then guide the emergency team on which type of stroke a patient is ailing. Additionally, the team must rule out all similar conditions like a drug reaction and brain tumor. Afterward, the doctor may put a patient under tests to evaluate risks of getting a stroke which includes physical examination, cerebral angiogram, blood tests, and carotid ultrasound.

In case of emergency, stroke treatment will depend on whether the patient has an ischemic stroke. In such a case, the doctors will attempt to block the artery and restore blood flow preventing hemorrhages around the brain. They will also apply clot-busting medication that is followed with therapy which functions in less than five hours if they are delivered through the vein.

Luke Perry was an idol who concentrated his talent in the acting industry. Luke is well-known for starring in his breakout role on 90201. Right before his death, Luke played the character of Archie’s father in a script called Riverdale. His death perplexed everybody being only 52 years old. Luke Perry suffered a massive stroke that he could not recover from. During his last moments, he was surrounded by his entire family including his two kids and the fiancé. It does not matter your age, a stroke can happen at any point, so be sure to think FAST if you believe you are having one.