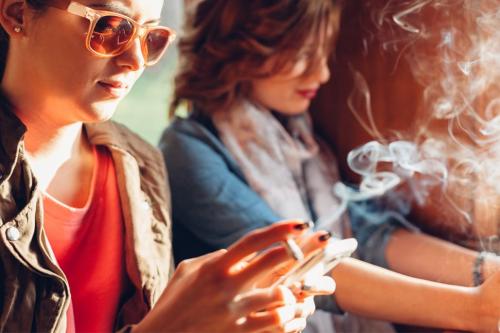 Smokers Lungs - How They Measures Up Against Healthy Lungs

Smoking can lead to some pretty serious infections and diseases, including bronchitis and cancer. In general, smokers lungs tend to be unhealthy compared to nonsmokers. Learn more about the harm smoking can do to your lungs.

Lungs are a pair of vital organs needed to transfer oxygen to the bloodstream and remove carbon dioxide and other toxins from the body. A healthy pair of lungs is pink just like the ones you see in your high school biology textbook or a hospital’s human anatomy chart. So, what happens when lungs get corrupted from smoking? The lungs of a smoker turn from pink to black due to all the tars, toxins, and smoke. The texture turns from soft and flexible to hard and brittle. The person smoking will experience shortness of breath, tightness in the chest, coughing, even severe symptoms when lungs fail because of excessive smoking.

When lungs of a smoker are not working well, oxygen will not get into the body as required. The smokers lungs will also be unable to get rid of unhealthy substances. Smoking often times results in asthma, chronic bronchitis, emphysema and other debilitating diseases as well. Many people who do smoke, mildly or excessively, have one or combination of these illnesses. Symptoms on smokers lungs from all these illnesses tend to be the same and sometimes overlap.

For a smoker, asthma can be much more severe than asthma in nonsmokers. Here, the smoker will experience shortness of breath due to the airways of the lungs being narrow and unable to carry enough air into the body. The irritants from cigarettes and vapes will also cause inflammation of the airways resulting in coughing and wheezing. Lungs of a smoker with asthma may also fail and result in other organ failures.

Smokers who have chronic bronchitis often have a persistent cough and chest tightness. In the lungs of a smoker, the airways become narrow interfering with breathing. The inflammation of the smokers lungs causes the glands that line these airways to produce thick mucus. It’s not just smoking that causes these symptoms, even second-hand smoking, where one gets exposed to smoke through other smokers, is almost as bad.

Another illness that is caused by smoking is emphysema. The lungs of a smoker contain air sacs that are damaged, obviously due to smoking. The air sacs lose its natural elasticity, overstretching and causing itself to break. At this point, the airways also become narrow and tend to collapse. Due to this, blood fails to get oxygen and get rid of carbon dioxide. A large amount of lung tissue gets destroyed as well. The capacity of the lung is lessened to the point that it is harder to breathe even during rest.

Apart from the above-mentioned illnesses, smoking causes other side effects that may not be able to be cured. Smoking tends to trigger an allergic reaction in some. If you are suffering from a mild symptom due to an underlying condition, that symptoms may be triggered just by inhaling a couple of tobacco puffs. Like mentioned earlier, whether you smoke yourself or be around people who smoke, irritation and damage to lungs are sure to happen. The carbon monoxide in the smoke robs your body of oxygen, and you feel more tired than usual. The irritation from the smoke is more likely to cause other body infections. Unfortunately, once the damage is made on the air sacs, the condition cannot be reversed.

There are many treatment plans and programs designed to lessen the consequences of illnesses related to smoking. Quitting this habit is one of the easiest and safest treatment plan out there. The best thing about quitting if you don’t have to pay a price. Besides being helpful and affordable, it has no undesirable side effects.