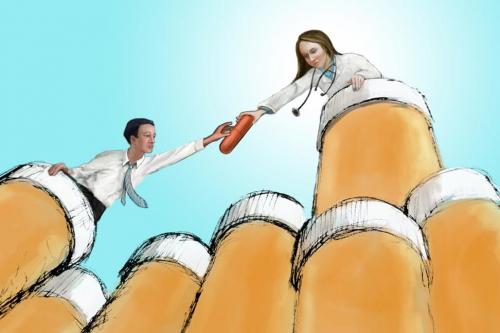 The opioid epidemic in the US is reaching new heights, and US Surgeon General, Dr. Jerome Adams says it may be time for all Americans to begin carrying the antidote Naloxone.

If you've been up-to-date with the news, you're probably aware of the opioid epidemic hitting the United States. Though the misuse of opioids has been an issue for decades, the overdose rates are climbing every year.

When it comes to treating those with substance abuse, though it can be seen as a pre-existing condition, patients can find better assistance now compared to years before. Nevertheless, the issue remains with how to help those who have already overdosed.

There's an opioid overdose antidote available for purchase. With the opioid epidemic growing, U.S. citizens are encouraged to start carrying the opioid antidote to help.

Some Details About Opioids

To offer a brief explanation about the drug behind the crisis before we get into the opioid antidote, opioid medication is commonly prescribed to patients. It serves as a potent pain-reducing medication. In prescription-form, they come as oxycodone, hydrocodone, morphine, and more.

However, opioids also include illegal drugs. The well-known illegal opioid strains are heroin and fentanyl.

When a prescription opioid is used correctly, it is proven to provide adequate pain relief. Even still, the potential for abuse and addiction is extraordinarily high.

Many experts agree that the United States is experiencing an epidemic of opioid misuse and overdoses. This all began back in the late 1990s when prescription opioids were given out regularly as they weren't considered to cause widespread addiction. From 1992 to 2012, the amount of prescription opioid medication given out expanded from 112 million to 282 million.

Though that rate did fall by 2016, the damage has seemingly been done. The rate of opioid abuse continues to increase both with prescription medication and illegal drugs.

According to the National Survey on Drug Use and Health, in 2016 alone, over 20 million U.S. citizens 12-years-old or older suffered from substance abuse. Among that, 2.1 million abused an opioid with 1.8 million using prescription-based drugs, while 0.6 million took to illegal substances.

It is estimated that among those prescribed, between 8% to 12% develop an addiction. Roughly 4% to 6% of those misusing opioids transition from prescriptions to heroin. More than 115 Americans die from opioid-related overdoses on a daily basis.

Because of the opioid crisis, the FDA is attempting alleviate it by encouraging companies to develop a more abuse-deterrent opioid. Since the science behind this is relatively new, it is unclear exactly how this will reduce the risk of abuse.

What is the Opioid Overdose Antidote?

The opioid epidemic has become large enough in scale that the U.S. Surgeon General, Dr. Jerome Adams, issued the rarely used the "Surgeon General's Advisory" focusing on the opioid antidote. This came about as the deaths from opioid use doubled in the past few years, many of it being contributed to synthetic strands of the drug such as fentanyl.

Because of this, the U.S. Surgeon General alongside other medical professionals are encouraging Americans to carry the opioid overdose antidote known as naloxone. Naloxone, otherwise known as Narcan, is used to reverse the opioid overdose symptoms. It has no effect on other drugs or alcohol, and if there is no opioid in the body, it does nothing.

This opioid antidote can be purchased without a prescription in most states, but it is important to check with your place of residents to be sure about how you can get it. Being able to purchase this without the need for a prescription can make it easier for the opioid overdose antidote to get into more hands.

When someone has overdosed on an opioid, there are obvious signs. An opioid overdose hinders the body's ability to breathe. It can also cause skin to pale, a sluggish heartbeat, and you may hear the person struggling or gasping for air. The person may also make the so-called "death-rattle", which is a snore-like or choking noise.

Try to rouse the person by touching them, calling out to them, and rubbing your knuckles on their chest. A lack of response to outside stimuli is a sign of an overdose. In this case, it is necessary to intervene by calling for help or using the opioid antidote in order to save their life.

To use the opioid antidote, first be sure you've recognized the overdose in question and have called 9-1-1 for help. Administer basic CPR and look at the directions on the type of naloxone you have. As the opioid antidote is available in more than one form (nasal and injection), it's vital to follow the right directions.