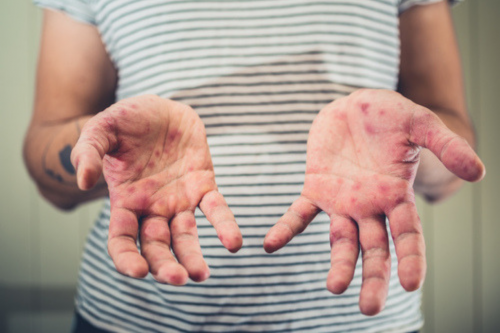 Measles Outbreak In New Jersey Leads To Over 80 People Exposed

There were possibly 86 New Jersey residents exposed to the measles at a New York party, the measles are a highly contagious disease that can spread easily.

Over 80 Ocean County residents came down with measles after attending a private event in New Jersey. There have been a record number of cases in the area and the numbers are expected to rise, according to New Jersey health officials. The measles outbreak first occurred in Lakewood and spread to neighboring areas.

The Ocean County health department didn’t specify when or where the event took place. On Friday, Dec. 7, 86 people may have been infected with the highly contagious disease. There were 18 confirmed cases and six suspected cases in the entire county. Residents who were exposed to it are currently in touch with county health officials.

Measles is an infection that’s caused by the rubeola virus. This virus takes place in the mucous areas of the nose and throat in infected adults and children. This virus remains active on a contaminated object for at least two hours. Measles is typically caused when someone comes in personal contact with an infected person. It’s also caused when a person touches an object or surface that contains infected mucus droplets and then touches their eyes, mouth, or nose.

Measles is a contagious disease that resides in the throat and nose of an infected person. This virus can spread to others by coughing or sneezing in the air. It can live up to two hours in the same location where the infection person sneezed or coughed. Those within the area of the contaminated air or surface can get measles.

Measles is a contagious virus that can spread to others who are not immune to the virus. Infected people can spread the virus to other people up to four days after a rash surfaces on their body. Measles is only a virus that resides in human beings; it can not be spread by animals.

A rash will break out three to five days after the other measles symptoms appear. This kind of rash starts gradually spreads towards the arms, legs, feet, neck, and trunk areas. This rash may also contain bumps on top of the red spots. These spots clump together as they spread to the rest of the body.

If left untreated, measles is serious for people of all ages. However, it’s common in children under 5 years of age and adults over the age of 20. Both of these age groups are likely to suffer from the serious complications of measles. Some of these complications can range from diarrhea to ear infections.

There is no specific treatment for measles. Complications from the virus may require antibiotic treatment. Some forms of treatment include bed rest, plenty of fluids, and paracetamol to reduce fever. Children under 12 years of age or younger shouldn’t take aspirin unless advised by a pediatrician.

Prevention would be to remove the person from school or work for the next four days after the rash appears. In most circumstances, however, people who aren’t immune to measles should be removed from school or work for at least 18 days after coming into contact with the infected person. Any person who comes into contact with an infected person is said to be at higher risk for the virus.

The measles outbreak occurred in Lakewood after a person traveled to Israel where they were exposed to the virus. They brought the virus back with them in Lakewood following their trip. This first case of measles was reported to the Ocean County Health Department on Oct. 26. The virus continued to spread throughout Lakewood, Ocean County, and Passaic County.

The state’s health department has included a list of places visited by infected people and has urged residents to get vaccinated. Thousands of people in Ocean County have reportedly received vaccinations following the measles outbreak. Those who received two doses of the measles vaccine as children are considered to be protected for life and don’t need a booster vaccination, according to the Centers for Disease Control and Prevention.

Before traveling overseas, it’s important to reduce your chances of getting this infectious virus. Make sure your routine vaccinations are up-to-date (including the measles vaccine) and find out about any other vaccinations you need. Get advice from your doctor on how to prevent travel health problems and what to do if you get sick when overseas.