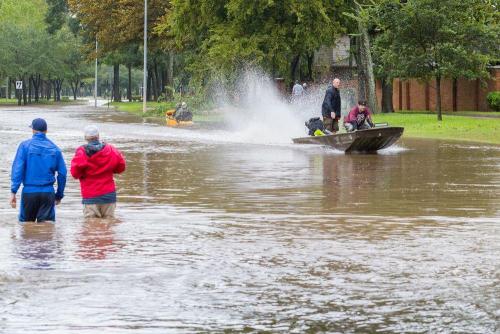 Health threats from hurricanes and flooding last longer than the storm

Hurricane Harvey rewrote the record books and inundated Houston and other areas of southeast Texas with over four feet of rain. Hurricane Irma is threatening similar damage to the Florida coast as well.

When Harvey moved out and the sun began to shine for the first time since the Category 3 hurricane made landfall nearly a week earlier, millions of Texans found themselves chest high in the middle of one of the worst floods in U.S. history.

Even as the waters dissipate and the flood threat diminishes, Texas residents will find themselves surrounded by health hazards, any one of which can pose potential health problems. A 2012 Environmental International publication discovered a 50% increase in mortality rates in the first year after a flood. From drowning and floodwater injuries to the effects of contaminated water and mold exposure, large flooding events like Harvey have a huge impact on victims’ short- and long-term physical health.

Contaminated floodwater is both an immediate and long-term threat for Harvey and other hurricane survivors. In times of flooding, hazardous waste sites often leak human waste, chemicals, and other dangerous toxins into rising floodwaters, resulting in an increased risk of infectious diseases.

In many cases, waterborne diseases, gastrointestinal diseases, and communicable respiratory diseases spread after floods. Although some of these dangerous diseases may appear immediately, others tend to linger for several days, months, and even years post-flood. This is especially true in severely hit areas with large displaced populations.

According to the World Health Organization, polluted waters pose an increased risk of waterborne diseases and health problems such as wound infections, conjunctivitis, and dermatitis. Ear, nose, and throat infections also see a spike in numbers.

However, outbreaks of more severe diseases, such as hepatitis E, gastrointestinal disease, and leptospirosis can also occur. Fortunately, leptospirosis is the only type of epidemic-prone waterborne disease common as a result of contaminated flood waters. While less common, this zoologic bacterial disease can be quite fatal.

Currently, the level of water contamination throughout southeast Texas as a result of Harvey is unknown. The regions affected by the flood are home to millions of people and dozens of EPA Superfund sites containing a variety of dangerous chemicals and toxins. According to Dr. Irwin Redlener, the director of Columbia University’s National Center for Disaster Preparedness:

“There is going to be a level of contamination that we have never seen before in floodwater because of the proliferation of chemical plants and oil refineries.”

After Hurricane Katrina devastated New Orleans in 2005, a study discovered the areas affected by the flood had experienced a significant increase in the number of West Nile infections. The study concluded the drastic increase was largely due to exposure, as many Katrina victims were forced to spend days waiting for relief or rescue.

According to the World Health Organization, the risk of an outbreak of mosquito-borne diseases is greatly increased by a number of complicating factors, such as changes in habitat, overcrowding, exposure, river rerouting, and deforestation. The risk of spreading West Nile, Zika, malaria, and other mosquito-borne diseases also increase as mosquito populations rise. Like New Orleans, Houston’s warm, wet, and humid climate makes it a haven for mosquitos.

A small amount of water damage can result in serious long-term problems for a home and its inhabitants. Mold grows extremely quickly, and people’s efforts to eradicate mold can worsen the situation.

As Houston residents are returning to their homes and cleanup begins, exposure to mold spores is inevitable. In addition to breathing in the moldy air from wet wood, drywall, and sheetrock, thousands of HVAC units will be flooded with water. Turning them on will spread the spores throughout the homes and only exacerbate the problem.

Mold exposure has been linked to a multitude of symptoms, such as coughing, wheezing, throat irritation, nasal stuffiness, and some cases, asthma. However, people with mold allergies may suffer much more severe symptoms.

Carbon monoxide poisoning is another very real health threat for hurricane victims. While often overlooked, carbon monoxide can be fatal, and it will be a big threat as power is still out and people are relying on generators.

When in use, generators should only be used outside or in well-ventilated areas to avoid carbon monoxide poisoning. The toxic gas is non-visible and has no smell, so it’s best to err on the side of caution and only operate generators outdoors.

These are just a few of the many health threats Houston residents, and residents of other regions affected by hurricanes, are now faced with. Fortunately, with proper preventative measures and post-flood care, many will be able to overcome these natural disasters.