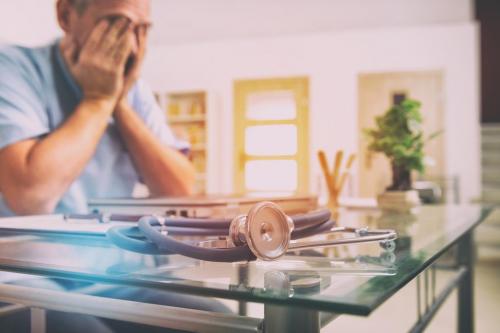 Doctors spend their whole careers dedicating themselves to the well-being of others, but new reports are showing that the stressful nature of the job and being overworked is leading to a high suicide rate among doctors.

We tend to think of our doctors as super-humans. Someone who can answer our medical questions cure whatever is ailing us, and be on-call to the masses of sick people 24 hours a day, 7 days a week. While they are treating a variety of contagious illnesses daily, we silently suspect that they never get sick, never get tired and lead amazingly happy lives with all the wealth they amass from their medical practice.

This is far from the truth.

Doctors have a very stressful job. Many doctors suffer from depression and are barely able to function. Medications and alcohol are the thin thread that keeps them from falling apart. The long doctor work hours and stress are causing many of them to unravel, which is in turn leading to high suicide rates among doctors.

It was reported earlier this year that one doctor in the United States commits suicide every day. No other professional has such a high suicide rate, not even the military. The doctor suicide rate is double that of the general population, due to the stressful nature and long hours of their job.

The prominent reason for the high doctor suicide rate is burnout that creates a depressed state of mind. Mental illness follows close behind. Either condition is often undiagnosed, untreated, or undertreated.

Denial is a contributing factor. Doctors are trained to diagnose and treat other, not themselves. They also have a large patient base that depends upon them to stay well so they will be able to take care of them. Doctors can’t have sick days. Doctors can’t cut back on the number of patients they see each day.

They must rise to the challenge and always be pushing themselves and their practice forward. They also need to meet the needs of their patients. The medical field is competitive, and if a doctor is diagnosed with a mental illness, or if they take time off to de-stress, their reputation and practice may falter.

Another contributing factor to the high rate of suicides among doctors is the loss of patients. Doctors invest all they have and all they are into patient care when a patient dies on their watch, it’s hard on them.

They are not the superhumans we think to be and the death of someone they knew and cared for hurts, but they have no time to grieve. Doctors must call the time of death, then move right onto caring for another patient.

A resident or doctor can log in 60-80 hours of work per week in one of the most stressful environments. Those long doctor work hours take a toll on the mind and body, increasing the doctor suicide rate. With little time left for sleep and to de-stress, a doctor’s body and mind are always in high gear, often running on adrenaline, caffeine and junk food. They will crash and burn if that pace is continued for an extended period of time. The human body is not able to handle that level of stress and fatigue and it will break down.

In addition to treating patients, some of which are less than cooperative, stress comes from new technology and old-fashioned paperwork.

Always having to learn and stay up to date on the latest treatments and surgical options is a recipe for stress and depression. Making notes, charting patient care, dealing with insurance companies and all the other bureaucratic red tape takes time and energy away from actual patient care. The frustration mounts and creates stress for physicians who just want to take care of their patients.

Is There Anything Being Done To Combat The Problem?

According to NPR Health News, steps are being taken to stop these day-to-day stressors that can lead to crippling depression and suicide.

Reduced doctor work hours is the starting point. A 40 hour work week is the becoming the new standard for residents and physicians in all practices. A 40 hour work week gives time for the doctors to have a life outside of their practice, time to de-stress and time to grieve over patient loss. Corporate training hours are being reduced and in some hospitals, being deemed as optional instead of mandatory.

Trained medical staffers, known as scribes, are shadowing doctors in the Emergency Room and other areas to enter notes into the doctor’s electronic record keeping devices. This allows the physician to have hands and mind freed from trying to deal with a stubborn computer program and focus on patient care. Anonymous care for mind and body is being put into place so doctors can seek out treatment without fear of losing their medical license or practice.

Being taught to stay in balance with both a private and professional life to prevent stress and depression is also a new concept for medical students and doctors.