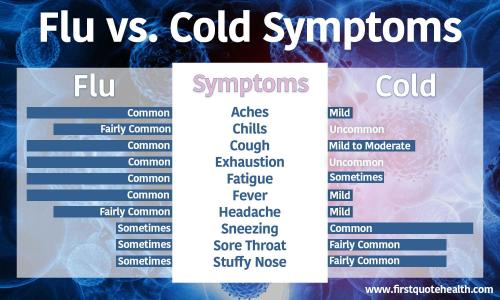 The Difference Between Flu & Cold Symptoms

A lot of people think that the flu and a cold are the same thing, but they actually aren't. So what are the main differences? Keep reading to learn more.

A lot of people think that the flu and a cold are the same thing, but they actually aren’t. When looking at the flu vs. cold, there are actually quite a few differences. These differences pretty much define what kind of sickness it is and this article was put together to help you identify which one it is.

The first thing you need to consider when it comes to the flu vs colds are what the causes are. Remember, the flu usually happens in flu season while a cold can happen anytime. Another thing to keep in mind is that the flu can happen even if it isn’t flu season, so keep reading to see the causes of both.

First, we’ll take a look at what causes the flu. Generally, the flu lasts for around 1 to 2 weeks and can actually be deadly. The only way you can catch the flu is if you come into contact with the Influenza A, B or C viruses.

With that being said, there are actually quite a few ways you could catch the virus without even realizing that you came into contact with it. Some of those ways are listed below.

A cold, on the other hand, can be caused by several different kinds of viruses, the most common is any of the rhinoviruses. While most colds only last about a week, some can stay for 2 weeks or longer. Some of the ways common colds are caused are listed below.

Once you’ve touched something that’s infected, you catch the virus if you touch your eyes, nose, and mouth.

Next thing to know is what kind of symptoms you can expect to experience with each type of illness. There are a lot of the same symptoms, but there are also ones that are different. Often times, the symptoms will help you figure out exactly which illness you have.

First, let’s look at the common symptoms of the flu. Remember that these symptoms can be pretty severe and, in some cases, can lead to death.

One thing to keep in mind is that someone with the flu won’t necessarily have all of these symptoms. They might only have a few and the only real way to know is by going to the doctor.

Most of the time, common cold symptoms are pretty easy to recognize. They can be bad but aren’t usually too severe. They should clear up in a few days.

Finally, you’ll want to know how treatment differs with the flu vs colds. The flu is much different the common cold, so it’s only natural that flu treatment would be different. It’s important to know how each illness is treated, so you aren’t experiencing the sickness longer than you need to.

When looking at flu treatment, there are quite a few things that can really help. Some of these will need to be prescribed by a doctor, while others can be done at home.

Keep in mind, newer strains of the virus might not respond to medications and you’ll have a harder time getting rid of it.

The only things that will require a prescription are certain kinds of pain relievers and cough syrups. Everything else on the list can be bought over the counter and some things can’t be bought, like the rest.