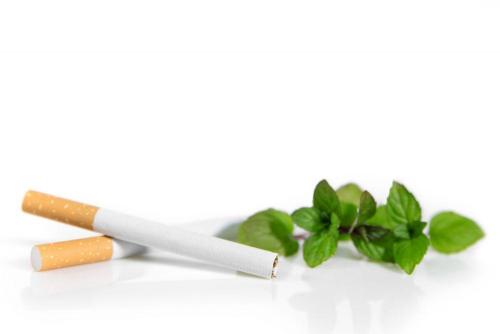 Is It Time To Say Goodbye To Flavored Tobacco? The FDA Thinks So

Menthol cigarettes and other flavored tobacco products are being targeted by the FDA because of their appeal to younger smokers. What this means for your nicotine habit.

The FDA recently announced the first steps to limit flavorings like menthol in cigarettes and other nicotine products. Federal officials say they are taking a close look at flavors that appeal to teenagers and young adults, especially menthol-flavored cigarettes, which have not been regulated despite government scrutiny since 2009.

The FDA has called for more information about flavored e-cigarettes and cigars, which have no flavor restrictions under federal law. The agency has announced it will give extra attention to menthol, which is the only cigarette flavor allowed by Congress under a 2009 law that put tobacco-containing products under the FDA's regulation. While the agency has tried to regulate the ingredient, efforts have been stalled. This law, called the Tobacco Control Act, gave menthol an exemption from other banned flavors.

Why The Attention To Flavors?

Researchers have found that flavored tobacco products are more appealing to younger smokers, especially mint flavors. Over 50% of underage smokers smoke menthols, according to one government study. Just 36% of adult smokers smoke menthols. 4 out of 5 young people who currently use nicotine products report using a flavored product compared to 28% of adults.Research has also found that younger adults prefer sweet odors and tastes, which may in part explain the appeal of flavored products currently on the market.

Despite the ban on flavored cigarettes, there is currently no oversight on flavorings in hookah, e-cigarettes, snus, snuff, chewing tobacco, and other products. These products are available in a huge array of cocktail, dessert, candy, and fruit flavors like grape, chocolate, appletini, cotton candy, and cherry.

The Controversial Rise of E-Cigarettes

E-cigarette products have rapidly gained in popularity over the last decade, particularly among young people. While studies have shown that these nicotine products can help adults quit smoking, they are also popular among young people. The controversy has increased over the last year with the rise of JUUL, a popular e-cigarette product popular among teenagers and middle school-aged children. Numerous reports have surfaced of adolescents and teens bringing the devices, which resemble USB drives, into school as a discrete way to vape in class.

Critics say e-cigarettes are only introducing a new generation of young people to nicotine addiction. A study published in Pediatrics asked more than 800 students if they used an e-cigarette product in the last 30 days between 2013 and 2015. During the first year, 9% of students used e-cigarettes and 4.8% smoked cigarettes. The study found that teens who used e-cigarettes were 7x more likely to smoke by the second survey.

A panel of experts recommended in 2011 that the FDA ban menthol products after finding the flavor increases smoking rates among young people and minorities while making it harder to quit tobacco. Major cigarette manufacturers sued to stop the agency from using these findings. In 2013, the FDA reached a similar conclusion about the dangers of menthol but did not take any action.

This new effort will consider not only menthol but whether flavors in e-cigarettes and vaping products may help adult smokers quit smoking. FDA Commissioner Scott Gottlieb said that the agency will consider all sides of the issue and take into account benefits and risks flavorings pose to the population.

Some groups, including the Campaign for Tobacco-Free Kids, have questioned the FDA's need for more input considering decades of research showing that sweet, fruity, and minty flavors mask the harshness of tobacco, help attract new and young users and make it more difficult to quit.

The agency has requested input on the effects of flavorings in snus, chewing tobacco, cigarettes, and other products. This will be the first step in a long, complex process to ultimately change federal rules, which is not a guarantee.

Smoking is the leading cause of lung cancer, COPD, and other lung diseases, but smoking can damage almost every organ in the body. Cigarettes are the leading preventable cause of death in the United States, causing nearly 1 out of every 5 deaths per year. Smoking causes more deaths in the United States than car accidents, gun incidents, drug use, alcohol use, and HIV combined. Smoking-related diseases and related conditions like heart disease are also among the most expensive conditions to treat.