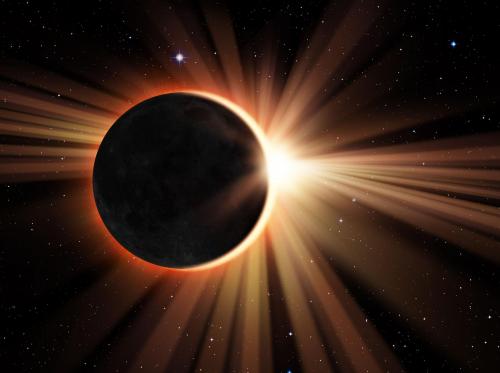 The Solar Eclipse is a can't miss event which features the Moon blocking out the Sun. Find out what important health tips will make sure you enjoy this celestial phenomenon safely!

The Sun is unarguably the staple for life on Earth.  Its direct sunlight beaming into the blue marble's atmosphere acts as an effective catalyst for just about everything on the planet. Although the Moon isn't integral to sustaining life on Earth, it does play its role creating ocean tides to ebb and flow, stimulating oceanic organisms' habitats, and providing endless entertainment to beachgoers.

What is a Solar Eclipse

Earth revolves around the sun in an elliptical orbit, while the Moon maintains its own orbit around Earth. Although it doesn't happen often, the Moon’s orbital path will line up directly in front of the sun blocking its incoming light, creating what is known as a solar eclipse.

A solar eclipse is nothing more than an intriguing astronomical happening that captivates audiences in the Sun's path. The upcoming August 21st's edition is a total eclipse, which means if you find yourself in the right place at the right time, the Moon blocks out the entirety of the Sun's rays leaving only the corona.  The corona is the heaven-like aura that surrounds the gaseous, burning mass, to be seen for no longer than two minutes and forty seconds.

Chinese culture was thought to have recorded the Moon's eclipse of the fiery Sun long before any other culture did, dating as far back as 2136 B.C. However, the National Aeronautics and Space Administration, more commonly referred to as NASA, found large stone blocks in Ireland that featured petroglyph inscriptions, detailing Sun and Moon alignments of normality, including the eclipse that occurred on November 30th, 3340 B.C.

Solar Eclipse Viewing in the U.S.

Unfortunately, not everybody across the contiguous United States can see this year's celestial phenomenon. Residents of wintry Alaska and breezy Hawaii have absolutely zero chance of witnessing the total eclipse.  Although they will, along with residents in every single state in America, be able to view a partial version of this uncommon phenomenon.

Residents in parts of 14 states will be able to view the total eclipse, although millions are expected to travel to the direct path of totality for a lifelong experience. Residents and visitors of Oregon will be the first to witness Monday's celestial phenomenon, beginning just east of Salem at 9:04 AM, Pacific Daylight Time.

Kansas City, Missouri, will get its first glimpse at the eclipse around 11:14 AM, Central Daylight Time. Charleston, South Carolina will be the last major city to experience this awesome astronomical event, at approximately 1:16 PM, Eastern Daylight Time.

Every location is different, so make sure to check your local listings prior to Monday. For many, this could be a once in a lifetime opportunity.

As with most other natural phenomena, the solar eclipse brought with it superstition and traditions.  For example, many cultures up believed that a solar eclipse can harm unborn children.  For that reason, pregnant women were warned to stay inside for the duration of an eclipse.

Some believe that the solar eclipse is not a natural occurrence, and take it upon themselves to protect the sun. Some of these methods include praying, clapping pots and pans together to scare away the evil attempting to eat the sun, and even shooting arrows of fire to the sky in hopes of reigniting the sun.

While myths have always been part of tradition, there is no scientific merit to an evil entity attempting to eat the sun, or the solar eclipse harming your unborn child.  However, science does warn of some potentially harmful effects of the solar eclipse.

Health Tips for the Solar Eclipse

To view the solar eclipse safely, the most helpful piece of advice is to find the best glasses for the solar eclipse. You can certify which glasses are legitimate, or not, by using NASA's helpful guidelines. Check out these other important tips for staying safe on Monday, and have fun!