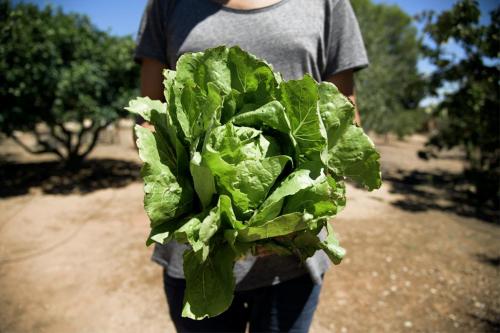 The E. Coli Outbreak Claimed Its First Victim This Week

The current E. coli outbreak has just claimed its first victim in California, according to reports from state and federal health officials. See what’s causing the outbreak, and the steps you should take to protect yourself from exposure.

State and federal health officials reported the first death linked to the E. coli outbreak taking the nation by storm. While no further details have been released, the Centers for Disease Control and Prevention (CDC) the outbreak has now reached 25 states and affected 121 people, 52 of whom had to be hospitalized. What’s even more alarming is is the outbreak has caused 14 cases of kidney failure, which is leading officials to believe the strain is stronger than previously seen. During an outbreak, people are going to have questions, so here’s what you need to know.

A bacterium found in food and the intestines of many animal species including humans, E. coli denotes a group of bacteria that is expansive and different. Some strains of E. coli are harmless, but others can cause illness, such as pneumonia. The O157:H7 strain can cause severe illness and possibly death if left untreated.

Some of the symptoms caused by an infection of the bacteria include:

Some people may develop hemolytic uremic syndrome, a type of kidney failure. Symptoms include:

A severe infection can develop for people who are under 5 years old, those above 65 years old, and those who have a compromised immune system. An E. coli infection is usually diagnosed with a stool sample, and antibiotic treatments are not recommended for those who have an infection of the O157:H7 strain. A doctor should always be contacted for a diagnosis

The Prevalence Of E. Coli Outbreak

The Most Recent E. Coli Outbreak

The most recent E. coli outbreak is not related to an E. coli outbreak that occurred from November 2017 through December 2017. The current outbreak is directly attributable to romaine lettuce from the Yuma region of Arizona. Harrison Farms has been identified as the source of the infectious whole-headed lettuce in some of the E. coli illnesses, but it is unknown when the contamination occurred. The rest of the illness is not caused by the lettuce from Harrison Farms. These are still caused by romaine lettuce, but the source was bagged and chopped lettuce used in restaurant salads. Since the growing season for romaine lettuce in the Yuma region is winter, no new lettuce will originate from this region.

The Spread And Timeline

Across 25 states, there have been a total of 121 cases of E. coli infections as of May 2, 2018. Most cases have occurred in California with 24 reported cases; Pennsylvania is in second with 20 reported cases. Of the 25 affected states, ten states have reported only one infection of E. coli related to the most recent E. coli outbreak.

The most recent E. coli outbreak was announced by the Centers for Disease Control and Prevention on April 10, 2018, with 17 cases. By April 13, 53 cases were reported from 16 states. On April 20, the CDC warned that full heads, hearts, and chopped romaine lettuce from the Yuma region. Just seven days later, 14 more people were infected, totaling to 98 infected individuals from 22 states. As of May 2, 121 people are reported to be infected and one person died in California.

How The Outbreak Is Being Handled

To determine the cause, the Food and Drug Administration (FDA) and the CDC a traceback investigation. This sort of investigation involves finding clusters of people infected with the same strain of bacteria, and the cause of the infection in each individual. From that point, the FDA and CDC trace the source of infection back to where it originated. This method was used to determine the cause of the current outbreak and its origin in Yuma, Arizona. In order to curb potential infections, the FDA and CDC are working with lettuce growers from the Yuma region, restaurants, distribution companies, and state and local governments to stop the spread of infection. As of now, the FDA and CDC advise against all consumption of romaine lettuce from the Yuma region. More information will be released as it is obtained and as it is appropriate.

What Consumers Should Do

Consumers should ask where lettuce is from and not purchase lettuce from the Yuma region. Lettuce already purchased from the region should be thrown away. If contact occurred, every surface touched by contaminated lettuce should be washed. Consumers should always practice safe food preparation measures, as well as washing hands before and after handling food items. If an infection is suspected, a consumer should contact a primary care physician for evaluation.