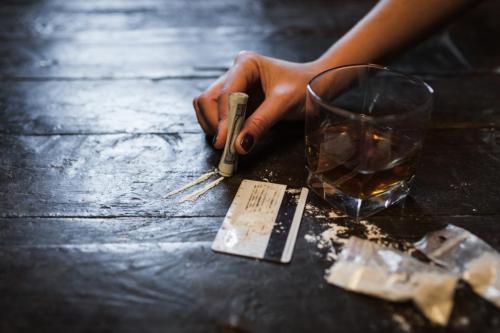 Cocaine And Alcohol - Knowing The Dangers And Effects Of Mixing

The glamorization of mixing cocaine and alcohol has lead to more harmful effects on partygoers than they may realize. A fun night of partying with these two drugs not only has short-term effects but long-term as well.

It’s safe to say that most people are aware of the dangerous effects of both alcohol and cocaine on their own, but what many people fail to realize is how dangerous a mixed cocktail can be. Often glamorized in Hollywood, mixing cocaine and alcohol has been a go to for those who indulge in the party lifestyle. However, the two drugs have adverse effects, and can lead to more harm than you may realize.

It’s not uncommon for people who drink to get tired over the course of a day or night, which is why they choose to give themselves a little pick me up. Using cocaine can give people a quick energy boost, allowing them to get back to party mode in a flash. The problem is the effects don’t often last for a long time, forcing users to keep it going without realizing the effects of what they are doing to themselves.

Short-Term Effects of Cocaine Use

The short-term impacts of cocaine use are diverse for different people. However, most users report a feeling of high energy, euphoria, and extreme happiness. On the other hand, some users say it impacts them almost the opposite. They say they feel relaxed and melancholy.

Some say the drug’s influence starts almost immediately when freebased or smoked like crack cocaine, but it takes longer when snorted or drank in tea. The length of the high also depends on how it gets introduced to the nervous system.

Cocaine users often do not feel the need to sleep or eat. They can sit and play video games for hours, though when they start to come down, they feel irritable and angry.

A short-term user can exhibit the following physiological signs:

When the drug starts wearing off without the user taking more, they may become irritable, restless, and even violent.

Short-term health problems include reduced appetite and stomach pain, nausea and vomiting, but over the long-term, these may become more permanent. Gastrointestinal problems such as diarrhea and constipation frequently occur, due primarily to the reduced intake of a healthy and nutritional diet.

The long-term influence of cocaine use can lead to a physical as well as a mental addiction to the drug. Since the brain wants more of the drug, the body can show signs of dependence. According to the American Addiction Centers:

“The current medical understanding of addiction involves changes to the structure of the reward system in the brain, leading to compulsive pursuit and ingestion of intoxicating substances.”

The dangers of long-term cocaine use, other than addiction, are usually irreversible, such as:

Snorting cocaine damages the nose and mouth. The mucous membranes of the user’s nose dry out, septal cartilage will dry out and eventually die, which can leave a hole in the side of the nose. Long-term abuse also creates perforations of the tongue and cheek.

Respiratory problems are common with long-term users, especially in crack cocaine smokers. Freebasing cocaine burns up the lining of the trachea or windpipe and damages the lungs, leaving the user susceptible to pneumonia, asthma, and chronic coughs.

Other long-term medical conditions from continued use include gastrointestinal, liver, kidney, and brain damage, making the long-term user prone to infectious diseases. Hepatitis and HIV/AIDS are common, not only because of needle sharing but also due to the intense sexual drive caused by the stimulant, coupled with a diminished immune system. Cocaine and alcohol mixed can increase exposure.

Short-Term Effects of Alcohol Use

Alcohol feels like a stimulant in small amounts. However, more substantial amounts are a depressant and lead to slurred speech, diminished motor skills, lightheadedness, vision distortion, and an inability to think clearly.

After a few drinks, the drinker feels good. They are less inhibited and can speak freely. Just a few drinks:

A median number of drinks produces:

Then, after several alcoholic beverages, the opposite is true. The drinker starts to feel tired and their ability to hold an intelligent conversation turn into a loud jumble of incomprehensible words. A heavy drinker or drunk might:

Binge drinking, or drinking large amounts of alcohol once or twice a week, is damaging to the gastrointestinal system, causes withdrawals or hangover, dependence or addiction, tremors or physical shaking, sleep problems, and nausea.

Wernicke’s Encephalopathy is a condition with a loss of coordination, memory loss, and confusion. Whereas, Korsakoff sufferers exhibit disorientation, apathy, and amnesia.

Women drinking while pregnant may develop Fetal Alcohol Syndrome (FAS). The child while in the womb gets fed through the placenta. While the mother is drinking, so is the fetus. The child receives doses of alcohol, which can disturb brain development.

In the US, nearly half the population over 12 years of age use alcohol. Alcohol use or abuse kills more than 80,000 people a year according to the National Institute on Alcohol Abuse and Alcoholism (NIAAA).

Risks of Mixing Cocaine and Alcohol

How to Get Help

Cocaine and alcohol users who need help dealing with either addiction should get immediate medical help. Quitting either drug is not something someone should attempt on their own. The withdrawal from a physical addiction can be painful and dangerous without medical assistance.

Sudden heart attacks are still a possibility in those who abuse cocaine and alcohol. Users should check into a medical or healthcare facility for safe detoxification. To get help, start with the National Institute on Drug Abuse.