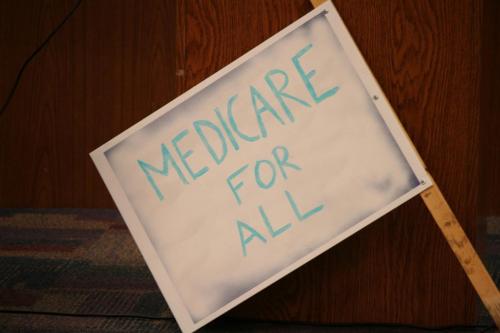 Medicare For All - Cost Of Bernie Sanders’ Healthcare Plan Revealed

The verdict is finally in on Bernie Sanders’ now infamous Medicare for All proposal, and the cost is going to shock you. Find out if this groundbreaking study makes or breaks any hope for single-payer healthcare in the US.

If there is one thing Vermont Senator Bernie Sanders and his 2016 campaign [will be remembered for, it’s the now infamous slogan ‘Medicare For All’. It is a campaign promise that Democratic supporters and candidates across the country are now jumping behind. You are probably wondering what this may mean for you.

Medicare is a well-liked program but expanding that coverage to everyone in the United States is a costly proposition. This is a fact that supporters and detractors of the policy are now grappling with. The reason for its popularity is its simplicity; take a well-loved program that already covers our senior citizens and the disabled and cover everyone else with it too. That simplicity loses some of its appeal once the complexities of its financial costs are taken into account.

Whether referring to it as Medicare for All or single-payer healthcare, it will move the entire cost burden for healthcare provision onto the Federal Government. Even if those overall costs end up cheaper than our current system, placing them all on the backs of taxpayers is likely to prove contentious and is fraught with difficulty, particularly if you consider the constraints of our political system.

Study Reveals Cost Of Bernie Sanders ‘Medicare For All’

The big question in all of this is, what would Medicare for all cost in practice? The answer is a staggering, though not surprising, $32.6 trillion over a 10-year period, confirmed by a recent study from the Libertarian group the Mercatus Center. The good news in that almost unfathomable number is that due to the concentrated bargaining power inherent in a single-payer healthcare system, drug costs would decrease.

The Medicare for all cost analysis also points to savings from a consolidated administrative apparatus to run the program, compared to the disjointed hodgepodge of private and public payers in the current system. Despite those cost savings, however, under the Bernie Sanders plan, close to 30 million more Americans would have health coverage, and they would use it. That increased access and utilization of the system would eat up a significant portion of those savings.

What It Would Mean For Your Taxes

How would the Medicare for all cost be paid for? Like most single-payer healthcare systems, the funding would come from Federal government, through taxes, both corporate and individual. The Mercatus study concludes that even if income taxes and corporate taxes were doubled, the Bernie Sanders health plan would not be fully paid for.

What It Means For Your Health Coverage

What this Sanders’ proposal could mean for your health coverage is harder to qualify. The Sanders’ Medicare for all cost falls entirely on the Federal government. For users of healthcare services, this means no out-of-pocket costs. Medicare for all, as described by the Sanders’ campaign, would have no premiums, copays, or deductibles for any health services or prescriptions. In theory, under a single-payer healthcare system, all providers, meaning doctors, clinics, and hospitals, would accept Medicare.

However, Medicare pays those providers less than today’s private insurance providers. There are a lot of unanswered questions about what that would mean for the supply of doctors and hospitals, most of whom would be receiving less money than in the current system.

Sanders Fires Back Against ‘Biased Claim’

Bernie Sanders was quick to fight back against the study, noting that the Mercatus Center, with one of the well-known members of the conservative Koch family sitting on its board, was biased against his Medicare for all plan long before the study. Sanders pointed directly to the Koch brothers in his response, indicating he believes the report is only now appearing due to the growing support for single-payer healthcare across the country. Bernie Sanders also noted that if every major country on the planet can “guarantee healthcare to all” its citizens, for less money, there is no reason the United States could not do the same.

Regardless of Bernie’s rebuttal, the Trump Administration has given no support for such plans, so for now, Medicare for all is nothing but a campaign slogan.